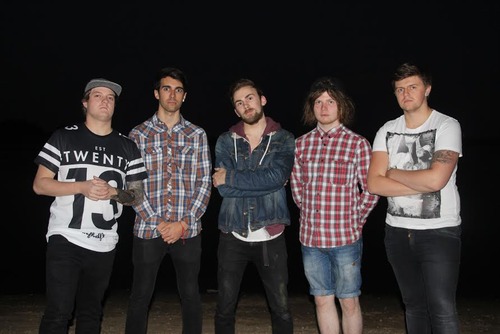 Combining the best aspects of both pop punk and hardcore, ‘Superficial Behaviour’ is the debut EP from We Fight Like Kids, a five piece from the Midlands.

To tie in with this exclusive EP stream, the band have written a track by track guide which you can check out below the player.

‘Superficial Behaviour’ is a title that ties in with the meaning of our band name, a reflection of the ‘Internet generation’ and all the drama and superficial behaviour that goes on around these people.

1. Falconer
‘Falconer’ was the first song we fully completed for the EP, when writing this song I had an idea in my head of what I wanted, a short catchy song that somewhat tied in with pop music yet had hardcore characteristics in the instrumentals, the lyrics are about relationships and getting over the obstacles that come along with them.

2. Tequila Slammer
The music for ‘Tequila Slammer’ came about after going to Leeds Festival 2013 and was definitely influenced by the ambient environment of festivals, having the opening riff that is perfect for jumping to, a hard verse to mosh to and then a Pop-Punk chorus for the payoff of the buildup, the lyrics are about doing what you want and being certain about where you’re going in your life.

3. Select The Ejector
‘Select The Ejector’ was the first song that we musically wrote; it was just as the band was in the very early stages. It all started with one section – the clean guitars for the verse and then we built the whole song up from there. Lyrics relating to people who talk down to others. This is the only song on the EP that is in 6/8 so it has a nice sway to it.

4. Ice Breakers
‘Ice Breakers’ is our most striped back song with a more basic layering but also had a bit of an electronic influence in there specifically on the riff.

5.Creeper Complex
‘Creeper Complex’ is the track we got to experiment with the most; it has a theatrical feel to it so when we were in the studio we got to play with those characteristics adding the orchestral intro. This song being selected as the last track as we wanted to end with a big sound, we even have an alternative ending for our live shows. Lyrics being about a relationship or friendship being broken down and slowly ending. Also for any gamers out there, the name is a tribute to the game Minecraft as our guitarist Gianni was playing that game when he got inspired to write this song!

‘Superficial Behaviour’ by We Fight Like Kids is released on 3rd November.