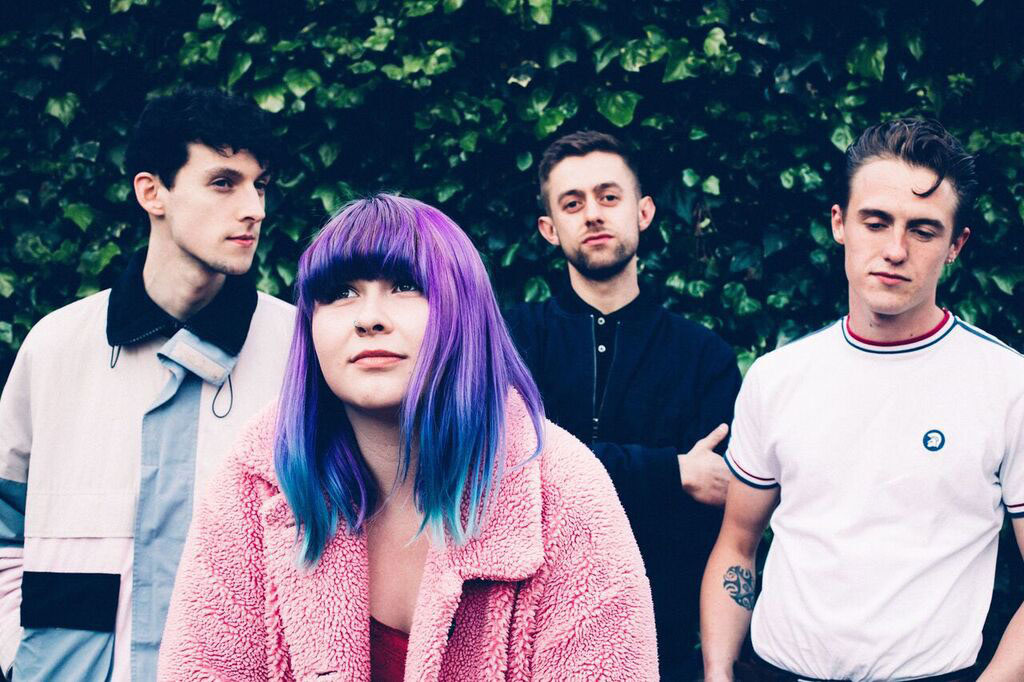 Over the past few weeks, up-and-coming rockers, The Dabhands have been previewing their new EP – ‘Bad Apple’. Now with days before its full release, we’ve teamed up with the band and Rose Coloured Records to premiere the EP in its entirety.

The EP sees the Guildford quartet take their alt-rock influences and combine it with vocalist Katie Campbell’s feisty lyrics. With a hint of indie rock throughout its five songs, The Dabhands serve up a vibrant set that highlights their growth as they come into own. From the urgency on the opening title track and ‘Take My Blood’ to the addictive melodic wordplay on songs such as ‘Black and White’ and ‘Nothing But Yourself’ to the melancholic flow that drifts through ‘Reflection’, The Dabhands showcase self-assuredness in their songwriting.

In addition to our exclusive stream, Katie along with guitarist Ryan Hick and drummer Will Cook talked in detail about the five tracks that make up ‘Bad Apple’.

Katie: ‘Bad Apple; is about someone I had kinda started seeing, but I should have known better. This all ended one crazy drunken night that I really shouldn’t go into detail about on record. But fuck it, she begged me to come out then got off with someone else and left me stranded in some dodgy as fuck place with no money.

Will: ‘Bad Apple’ had to be the opener for this EP. It kicks things off with some powerful momentum and conveys the atmosphere we want to create throughout this EP. There are moments like the verse where we pull things back, slow it down and let Katie’s lyrics paint a picture, whilst we use the choruses to bring energy and intensity to drive you through the song. Liam’s bassline is hypnotic throughout the verses, and it was great to come up with a drum beat that locked in with his rhythms. It was perhaps the most natural song on the EP, in terms of the writing process. The parts just came together one after the other, without really any discussion needed from us, and we hope that the ease of that process comes across in the final result.

Ryan: This was the easiest track we’ve written to date. Everything came so naturally and we wrote the track in no less than half an hour.

Katie: ‘Black and White’ is about repeating to myself every reason not to do something and not to be upset about. It’s comforting.

Will: ‘Black and White’ is definitely my favourite song to play live. It’s high energy throughout and packs a punch! It’s certainly a fun one as a drummer, quick and heavy and to the point.

One of the highlights for me is the guitar solo, that where the full intensity shines through and that carries through to the last chorus, where Katie’s melody employs more freedom, lifts the melody higher, and brings in some last adlibs to bring that final punch to the song. The ending always hits me hard, fuck knows which one of us came up with it now, but whoever did had the right idea.

Ryan: I came up with the main guitar part just singing in my head then quickly translated the idea to the guitar. The whole band collaborated as we always do to finish off one of our most upbeat tracks.

Katie: ‘Nothing But Yourself’ is a reminder to myself not to spend so much time thinking of other people, if it makes me so unhappy, especially if I know I’m gonna shoot myself in the foot anyway. I’ve made my bed, either lay in it or give it a fucking rest.

Will: ‘Nothing But Yourself’ is a banger! It’s the second single from the EP and the last song we wrote. I think what made this song such an obvious choice as the second single was the vocal hooks in the chorus, the lyrics and melody come together to make it catchy, something that we hope gets stuck in your head.

This song is the one that we had the most discussion over, from altering lyrics, changing the chorus, and a whole outro section that we scrapped entirely, it took a lot of thought but we’re more than happy with how it turned out. My personal favourite moment is during the last chorus, where Katie uses alternate lyrics to add a greater depth to the meaning of the song in its last moments, and it stands out to me as something that I’d want listeners to pick up on.

Ryan: This one took a lot of work. You wouldn’t think so as the tracks form is very simple but it took a lot of reworking and trying out different ideas. Originally it had a different chorus and a long instrumental section at the end of the track, but in the end, I think we came up with the best result we could have.

Will: I think we all agree that ‘Reflection’ is one of the most mature songs we’ve written to date. We dialled back some of our usual rowdy-ness and let emotion sing through in this one. I remember coming back to the studio after missing a day for work, and hearing that Katie had added a new vocal part to the bridge. She’d added these floaty peaceful harmonies that added a whole new dimension to the previously instrumental section. The moment they pick up alongside the tambourine coming in has to be one of my favourite moments of the EP. Some credit goes to TJ, our producer @mellowheaduk, for his amazing ear for harmonies that he lent Katie in creating that section.

Katie: This is about someone I know who is unwell and at the mercy of other people’s time. Bless her. She just wants to go out and party but there is always a time limit.

Ryan: ‘Reflection’ is my personal favourite on the EP. It shows a different side to the band and shows a maturity in our songwriting.

Katie: This song is tricky to explain but apparently I’m allowed. Me and our drummer Will used to go out with each other years ago. A few months after we split, Will got diagnosed with leukaemia. This hit us all like a tonne of bricks. I found it really hard. I wanted to be there for him but I couldn’t anymore because we weren’t together. Long story short, I needed to do something to make it feel like I was doing something to help without bothering Will. I’ve always been shit scared of needles. I’ve been known to run away! I decided there were a lot worse things I could go through than getting stuck with a needle, so I became a blood donor. You probably should become one too. I’m happy to say Will is fine now.

Will: ‘Take My Blood’ finished the EP off perfectly. This is the song we’re ending our live set with currently, and it always goes down well. It’s got high energy similar to ‘Black and White’, but takes that energy in a different direction. It’s the fastest song from the EP, and hopefully, you enjoy that speed and energy as much as we do.

I’d say this song has the heaviest chorus out of the songs, but it contrasts that with these light, upbeat verses that show off Ryan’s ear for melodic writing guitar hooks. This was I think the first song I wrote with the band when I joined in 2017 and the lyrics hold quite a personal meaning to me. It’s been amazing to develop with these guys and it feels perfect to now be releasing an EP to show you how far we’ve come together. We all hope it’s as special to you as it is to us.

Ryan: ‘Take My Blood’ is probably the oldest song we have on the EP. A proper grungy aggressive rock tune. This track and ‘Bad Apple’ were written around the same time and I often thought of them as a pair.

‘Bad Apple’ EP by The Dabhands is released on 31st May on Rose Coloured Records.

The Dabhands will mark the release of ‘Bad Apple’ with a free EP release show at The Monarch in London on May 30th. Further details can be found here.