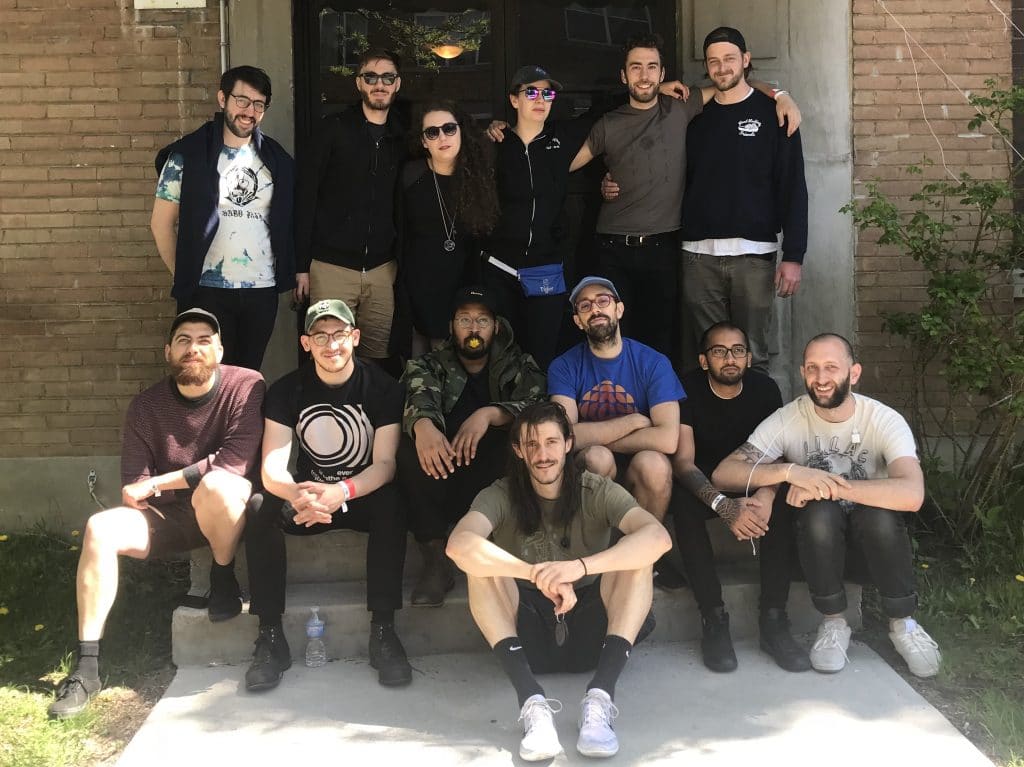 In any DIY scene, it’s commonplace for bands to get together and release a split EP. More often than not, these evenly showcase each band’s material separately but Brooklyn’s Good Looking Friends and Stay Inside have taken a different route on ‘Balancing Acts’.

After bonding as touring pals and a mutual appreciation for each others band, ‘Balancing Acts’ would go from being a standard split EP to a collaborative release. The resulting five songs is a concise and comforting collection that nicely blends both band’s attributes. By combing Good Looking Friends‘ rich alternative with Stay Inside‘s emotional post-hardcore sound, they have served up a fluid EP. From the gentle opener, ‘The Rope’ to the raw, fuzz-laden ‘Bodega Cat’ to ‘Testimonial”s stirring emotional release, ‘Balancing Acts’ shows an expansive side to both bands.

Ahead of its release this Friday on Old Press Records, we’re premiering the collaborative EP in its entirety. We also spoke to Stay Inside bassist Bryn Nieboer and Good Looking Friends guitarist and songwriter Zach Fischer about how ‘Balancing Acts’ came together.

AH: Let’s start at the beginning. How did Good Looking Friends and Stay Inside become friends?
Bryn: When Stay Inside first started playing together, we had a plan to find whatever the post-hardcore scene was in Brooklyn, and just start going to all the shows and making connections with those bands. Good Looking Friends was a band we were digging and when we tried to nefariously schmooze with them, it turned out they were just really cool people who really dug our music in return. So it started out as a ploy to get shows and ended up being an earnest friendship, as luck would have it.

Zach: GLF had been playing in New York for about a year when Chris and Vishnu came to see us at a show. They claim they really liked it, but I don’t think it was until we went on a weekender that we really got down. Few bands help out like the Stay Inside crew, and even fewer bands bring it as hard as Stay Inside does. They push us to be better.

AH: We hear the original plan was to release a split EP. How did it transform into a collaborative record?
Zach: Chris and I had been talking about how cool it would be to write a song together, as two bands. We decided to take two days and get whatever done that we could. We started tracking with the two songs which were most complete and whoever wasn’t actively recording would write a lyric, a lick, whatever. By the time we finished drums for the first two songs, we all got together and jammed out ‘Testimonial’ for the first time. The energy was ridiculous, and over the next two weeks of mixing, ended up writing more with whoever was around.

AH: For some readers, this might be the first time hearing both bands. Do you think ‘Balancing Acts’ is a solid representation of each band?
Bryn: To be honest, we’re pretty different bands! I think we both got a bit more post-rocky than usual, and I think people checking out Stay Inside’s last release would be surprised to hear that we’re usually much angrier and screamy. But we definitely try to strike a balance between anthemic, catchy hooks, and intense, aggressive music. I think ‘Balancing Acts’ dampens the aggression a bit. But I think overall we brought a bit of a darker and more sorrowful tone to the table and GLF brought their twinkliness, so it’s definitely somewhere in between.

Zach: I think it’s a strong nod to the versatility of both bands and the spectrum that we fall in. Neither of us are easily categorized, this split even less so. But if you like what you hear, you’ll probably dig the rest of the catalogues.

AH: The EP has been described as “a nostalgic exploration of both bands influences, musically and emotionally”. Care to expand on this?
Bryn: I think being in Zach’s parent’s house really brought that out in me. Something about writing and recording this record really made me feel like we were getting in touch with why we loved this kind of music growing up and what about it stuck with us through the years. As a kid, this music resonated with me because I was angry and confused about life, as most kids are it seems, and it was comforting to hear music that dealt with the intense emotions you go through at that age. But for a lot of us, the world doesn’t get less confusing or infuriating, it just gets more complicated. And ‘Balancing Acts’ is a collection of songs that deal with those complicated emotions and situations you get into as an adult, to the tune of the music that gave us hope in the past.

For me, it’s about finding contentment in the acceptance of those chaotic and sometimes traumatic feelings, and I hope people listening to it get the same kind of comfort they felt when they were a teenager, listening to whatever the album that did that for them was.

Zach: It was kind of like being in elementary school and going to a friends’ house for the first time. When you’re on the road or sharing a gig, there’s only so much time for catching up. Writing and recording this thing, we had so much more down time to just connect and share influences. We share the same drive, and it’s cool to find out what nuggets of songwriting manifest so differently in both bands. Also, whenever Bryn and I talk, it turns into a ‘have you heard of this?’ ‘No, but have YOU heard of THIS?’

AH: In terms of the songwriting, how did the EP come together?
Zach: A few of the songs were close to done and morphed when we got into the basement, others were written completely on the fly. It was something in between competition and harmony. Then Chris (Johns – Stay Inside guitarist) led the charge ongoing over the tracks again and again in the premix phase. But they really solidified them when we sent them off to Steel Wolf Markson (Such Gold, Taking Meds) to mix. He really brought the whole thing together. It was a lot of delegation and collaboration.

‘Balancing Acts’ by Good Looking Friends and Stay Inside is released on 20th July on Old Press Records (pre-order).