Delaire, the Liar: Finding Solace in Honesty and Intimacy 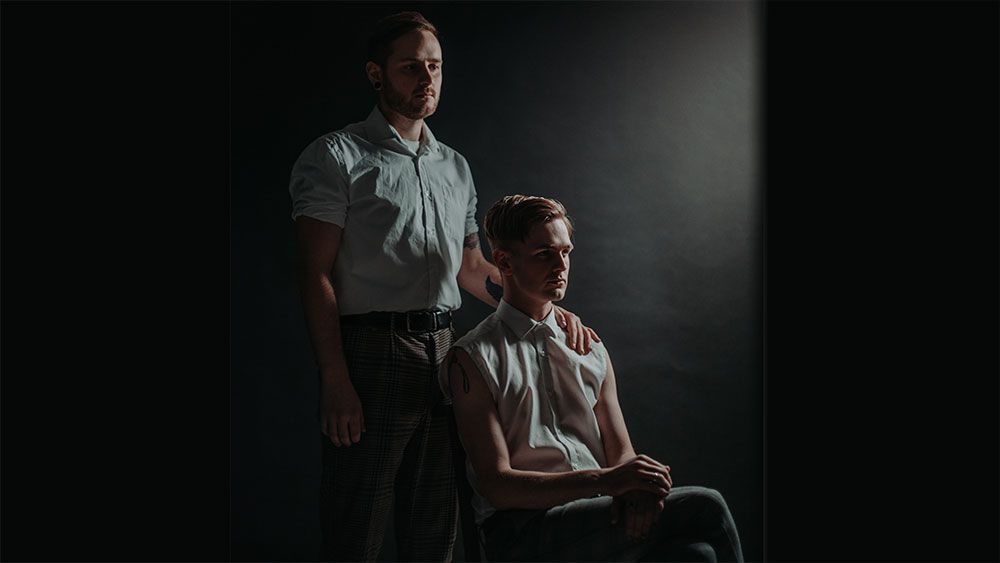 “It’s just been crazy,” sums up drummer Joey Brayshaw when discussing the flurry of activity he and bandmate Ffin Colley have served over the past 12 months. Together, Joey and Ffin are known as Delaire, the Liar, a London based outfit who are fast becoming one of the UK’s must-see bands. Their emergence began, at least publicly, in June 2018 with the release of their debut EP – ‘Not Punk Enough’. With its loose punk connotations, its five songs founded the emotionally wrought base that the duo have built on in subsequent singles.

“Looking back to this time last year, it’s a whole other level,” reflects Brayshaw. “We’ve been so busy. We’ve been putting work on the singles we’ve done since then (the release of EP) and we’ve had so many amazing gigs.”

While Joey speaks more straightforward about the last year, Ffin is more thoughtful and expansive, telling us, “At the time, it was really nerve-wracking because we’ve always had high hopes for this project. What’s the point in doing something if you don’t fully believe in it? And we did.

“When you start from zero, and your mindset is ‘we’re going to do this, put this out there and it’s going to be available to people to hear’ and see if they latch on to it in the same way we have. Just see if that feeling is reciprocal to a wider audience. It’s been humbling and gratifying.”

‘Not Punk Enough’ has become a catalyst for a host of opportunities including supporting Creeper at their final show at London’s Koko, playing the recent 2000trees Festival and opening the upcoming Heavy Music Awards ceremony. Whereas recent singles, ‘One of Us Is the Killer’ and ‘Our House Is a Church,’ have merely expanded on the raw personal exploration that their debut EP founded.  Through tackling the stigma around masculinity and mental health, Delaire, the Liar combine a thorough punk energy with songs about self-doubt and introspection. For outsiders, you would think Colley’s reflective songwriting would be cathartic, yet in regards to ‘One of Us Is the Killer,’ it was far from it.

“That song was written maybe two years before it was released. It was buried. That was a song we were never ever going to play again,” the vocalist and guitarist explains. “It was in a very painful time in my life, and it was used in a way to expunge some kind of feeling and emotion.”

Although the duo revisited and reworked the song (“it was very soliloquy,”) Ffin admits that performing the song is still difficult yet acknowledges he needs to feel those emotions to give it conviction. “If I didn’t feel it every time I played it, then the song would be fucking meaningless.”

Despite the growing wave of attention, Delaire, The Liar remain grounded and don’t plan on releasing new music without a purpose. “We want our next collection of songs to be a cohesive body of work. There’s no point rushing into that just because there’s pressure to do so if you’re not happy with the end result,” states Ffin when discussing future plans.

While they acknowledge they are in their formative years, they understand the need to have a linear songwriting approach. Colley continues by saying, “There’s got to be a consistent writing theme. We’re trying to figure what direction that is going to be in. Obviously, lyrically a lot of the themes revolve around well-being and mental health and stuff like that because that’s something we’ve both struggled to find our understanding with, and still continue to do so. We’re trying to make the best out of every situation that we have.

“Thematically, that is still going to be a factor, because it’s important. It’s being spoken about now more so than ever, which is great but there is still a lot of work to be done. I think that’s always going to be a key player in the way we write our songs, we make sure we’re looking after ourselves, and people that like our music are engaging in that mentality as well.”

From speaking to the pair, and witnessing their explosive set at 2000trees, it’s clear that there’s an open and honest relationship between Ffin and Joey. Their 30-minute outing on the Neu Stage captured the raw intensity heard on record, only to be complemented by the tight-knit and clear admiration and friendship they share for each other. “There’s just the two of us, so there’s no hiding. If one of us isn’t feeling it, then the song is no good. I’m very open with Joey about my emotions and particular subjects and interests. You have to have to be as bare as you can be to bring something to its full potential,” Colley tells us. “We have a very commutative relationship, where we talk about our feelings. We hug a lot and kiss. Hug and kiss your mates. Tell them it’s going to be alright.”

“It’s really humbling to know that the music we put out can help people in that kind of way, and people can find solace in what we’re making”

As clear advocates for removing the stigma around mental health issues, the duo are encouraged by the ongoing changes. “There’s progress being made where people are talking about how they’re feeling, and feel like they have environments to discuss with their friends,” says Ffin when discussing the prospect of talking openly about mental health. “I remember feeling close twenty people and not feeling like I could talk to them about anything. That’s a very fucking difficult situation to be in when you’re friends with someone, and you’re thinking ‘I want to put my fist through that wall’. I don’t think like that anymore and that’s something I’m still trying to develop. We’re still trying to work through.”

While as songwriters, they want to continue to bring an honest message, rather than write a “hit”. “You don’t want to write a song because it’s going to be popular. You want to write a song that you feel confident in delivering night after night. It’s got to have something that has your full backing, no matter what.”

Although they’ve only been active for little over a year, they are already finding a connection with admirers of the band. “It’s really humbling to know that the music we put out can help people in that kind of way, and people can find solace in what we’re making,” says Brayshaw as the pair discuss the response their music has had on listeners with Ffin expanding, “The fact that you’ve made a positive impact on someone’s life. It gives you a bit of fuel to fire. It keeps doing what you’re doing because not that it’s not legitimised by other people’s opinions, but the fact it is making a positive impact, makes you want to keep doing it. It’s a very nice bi-product of life in a band.”

Undoubtedly, Delaire, The Liar are levelheaded in where and how they want to take the band. After a considerable whirlwind year, they are an exciting prospect in a time where being open-minded is becoming more common. As part of a growing set of voices opening talking about mental well-being, Ffin and Joey feel they are part of a community that is becoming increasingly inclusive, especially in the UK. “From what we’ve seen and the bands that we play with, there is so much going on and so much good music, I think that itself, is a good enough metric of how rock is doing in the UK,” Brayshaw indicates.

‘Our House Is A Church,’ ‘One of Us is The Killer,’ and ‘Not Punk Enough’ by Delaire, The Liar are available now on Crooked Noise Records.

Delaire, The Liar will be performing at the Heavy Music Awards at the O2 Forum Kentish Town, London on Thursday 22 August 2019.