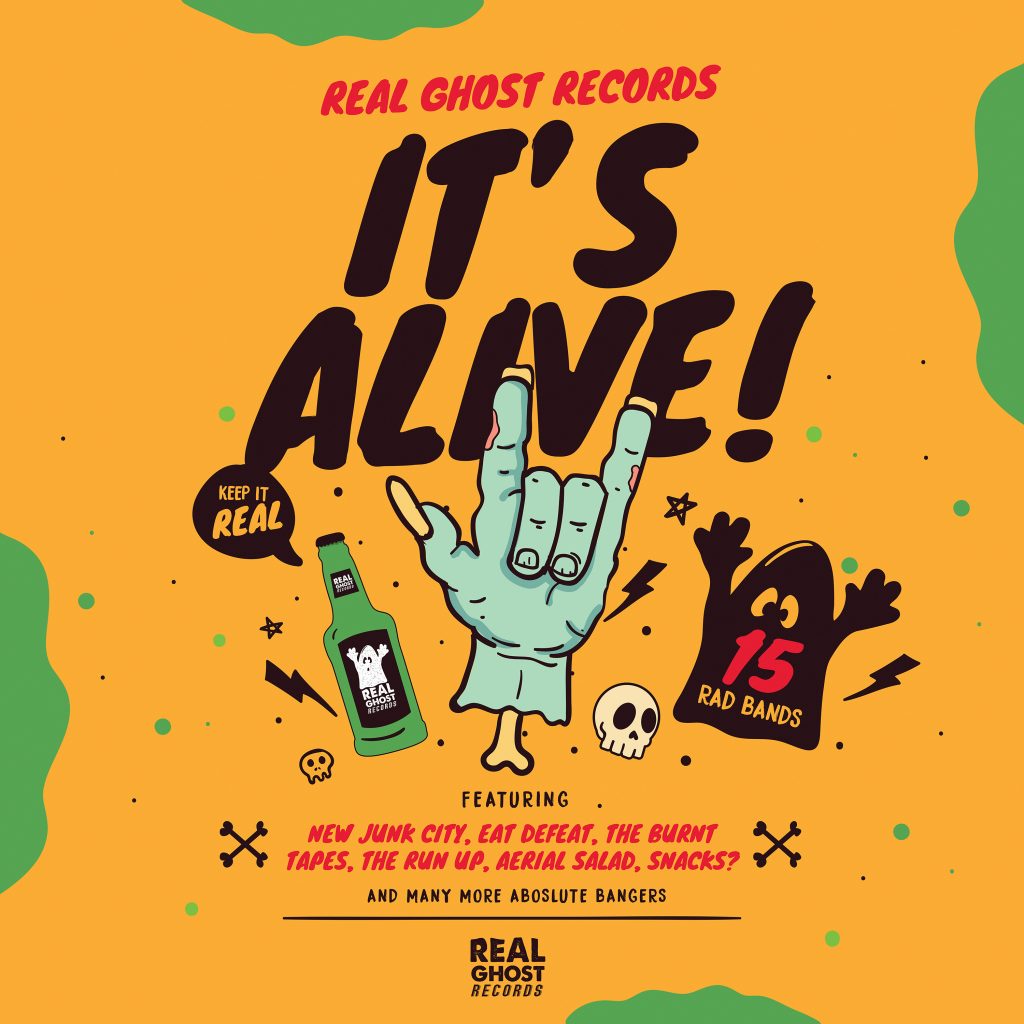 Last year, a new UK-based label called Real Ghost Records launched. Specialising in punk rock and with a collective experience of being part of the DIY scene, the tight-knit unit are passionate about the music they’re involved in and putting out.

Having already released music from The Run Up, Arms & Hearts, Mixtape Saints and I Like Allie, Real Ghost Records are now releasing a compilation titled ‘IT’S ALIVE!’ Consisting of 15 songs of punk rock goodness from UK, Europe, US and Canada, ‘IT’S ALIVE!’ emphasises what the label is about. Alongside those who already call Real Ghost Records home, the compilation includes songs from The Burnt Tapes, Eat Defeat, Triple Sundae, All Better, New Junk City, Atomic Hero, Aerial Salad and Bike Age. While Snacks?, Yeah Bud and American Graffiti have provided exclusive tracks.

To mark its release, we’re streaming ‘IT’S ALIVE’ in full. We also spoke to Real Ghost Records‘ Nick Pugh about the compilation, the label’s formation and future plans.

AH: Today we’re streaming your latest compilation – ‘IT’S ALIVE!’ Can you tell us about it and how it came together?
Nick: Compilations are all round fun, and we love doing them for a number of reasons. For an audience, it’s an ideal way to discover new bands and artists, or re-discover bands they already know of (for free). For bands and as a label, it’s a great way to obtain some exposure, to champion bands that we’re currently working with, and to make connections with others.

But ultimately it’s all about getting music that we’re excited about out to as many people as possible – and trust me this comp is crammed full of absolute ragers! As well as bands that we already work very closely with, and some that we have plans in the pipeline with (stay tuned), lots of bands on this compilation are either good friends of ours or are bands that we’re big fans of and whose music we’re proud to host.

AH: Real Ghost Records is a relatively new outfit, putting out it’s first set of releases in late 2017. How did you come to form the label and what’s the label’s ethos?
Nick: The three of us that run RGR are close friends and have been involved in the DIY punk rock scene for years in bands, working for other labels, putting on shows, booking tours, giving touring bands a place to crash, going to shows of course and all the rest of it.

We thought using our combined experience to form a label would be fun, putting out bands that we’re into and truly want to help out but also being able to offer a full service that can include everything from PR & tour booking to artwork – some of this is done via Ace High PR & Touring Co. that we also run.

We’ve got day jobs and life stuff going on and I don’t think we’d have considered setting this up unless we were genuinely passionate about the music, what it means to be a band/artist doing your thing and trying to get yourself heard.

AH: What is planned next for the label?
Nick: As you can probably tell we’ve played on the name of the label with the title and artwork of this compilation, and would love to make it a recurring thing, so another spookily good comp perhaps later this year could well happen.

We’ve helped book EU tours for our buds in The Run Up, Mixtape Saints and Arms & Hearts, which are starting from the end of April, and we’ve got some properly awesome releases being planned with bands that we’re massive fans of.

‘IT’S ALIVE!’ by Real Ghost Records is out now.