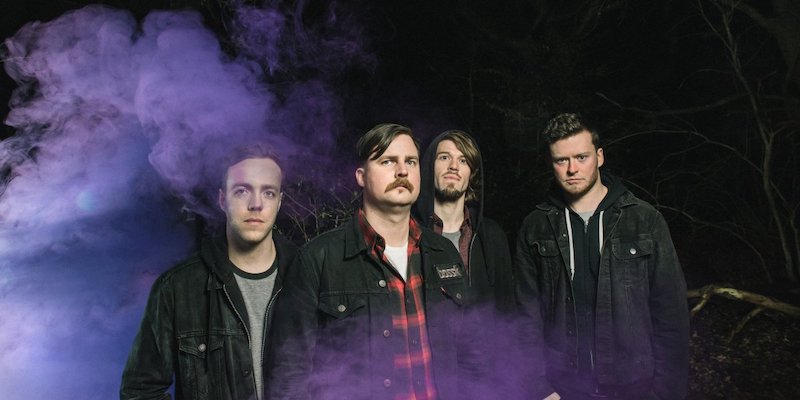 “They are so many things we’ve still got to give and to do, to be the band we want to be.”

“We overcome quite a lot of odds to get here and do this show,” reflects Black Peaks bassist Dave Larkin moments after coming off stage at the Download Festival. Yet for the Brighton-based band, it would be a temporary triumphant amongst a turbulent summer. With festival dates and shows alongside Smashing Pumpkins and Gojira pencilled in, Black Peaks would have to cancel them as vocalist Will Gardner recovered from a sepsis infection.

“We’ve had to be a bit quiet about it because it was a sensitive subject,” admits Larkin following on what would become a rare outing for Black Peaks. “Even today was on the cards. We didn’t know until a couple of days before we rehearsed and tested the waters if it was going to work. That’s why we feel so hyped to do this show.”

Joined by guitarist Joe Gosney, we sense the pair are relieved and delighted by their Download Festival set. Playing to a packed out Avalanche Stage tent, they delivered a memorable half-hour set highlighting Black Peaks‘ best qualities; dynamic, prog-infused hard rock with escalating guitars and an astonishing vocal display from Gardner. They even called in some favours to bring in some pyrotechnics – “it’s the home of bands who send out flames above the heads of the crowd, so let’s do it,” explains Larkin when questioned about the appearance of fire throughout their 30-minute outing.

In hindsight of what’s happened to the quartet in the weeks before and after Download, it’s clear why their set was so important. “For us, this festival means a big deal and I think it does to any band. It’s the home of metal and rock and everyone wants to come here and play the best show they can. There was a huge focus on it for us,” says Joe.

With drummer Liam Kearley rounding out the line-up, Black Peaks had seemingly been riding a wave of the momentum for the best part of a year, with their acclaimed second album, ‘All That Divides’, serving as one of the highlights. Although the four-piece have, until recently, been fairly active through the album campaign since its launch last summer, Gosney sees this run somewhat differently to the band’s debut album, ‘Statues’.

“It’s our second experience of putting out an album. When we put out ‘Statues’, it seemed, at the start, lots of stuff was happening around it; we got some great tours and there was a lot of good press surrounding the record, which was amazing. I think we’ve had the same for ‘All That Divides’ but it feels like it wasn’t the same at the start. It feels like it has grown really naturally.”

Outside the Black Peaks bubble, it’s hard to agree with Joe. Upon its release last October, the band went out on a UK headline tour and followed it up in the New Year with shows supporting Enter Shikari. Yet in hindsight, you can see why Larkin considers it “a back-ended campaign”. While there has been an unfortunate interruption recently, it is easy to see why he states “we’ve done some of the things that are the most exciting, towards the end of it.” Considerably their forthcoming Autumn UK tour, their biggest headline shows to date, will see them round off the ‘All That Divides’ album campaign.

Like a lot of bands, Black Peaks are creatively stifled by the requirements of a record cycle. Even though ‘All That Divides’ was well-received, opened up further opportunities and more, Gosney and Larkin are eager to begin work on a third record.

“We’re still promoting the album and playing shows off the back of it, which is great, but now in our heads, we’ve got all these ideas,” explains Joe. “They are so many things we’ve still got to give and to do, to be the band we want to be.”

Dave expands on this by stating, “it’s something we all feel because when you start an album campaign, you invest two, maybe even three, years of your life into it but in the same way you stand behind any piece of art you create, you’ve created it. So you’re playing it to people, which is awesome, but at the same time, you get itchy. You want to release and record more, and that’s where our heads are out now. It’s awesome to see the reaction to the things we’ve made but they’ve been made.”

In spite of some unexpected downtime, and in the case of Gardner, in need of some all-important recovery, the final months of 2019 look positive for Black Peaks with the combination of a headline tour and an eye on a third record.

Black Peaks will be touring the UK on the following dates:

‘All That Divides’ by Black Peaks is out now on Rise Records.