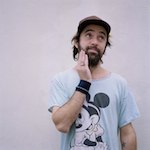 Beans on Toast has announced he will follow up his recent tour supporting Frank Turner with a limited edition ‘Best of’ 10".

The release will available on Record Store Day (April 19th). ‘Best of Toast’ will consist one track from each of Beans’ albums to date. Each 10" will be hand numbered, individually signed and limited to 300 copies.

Beans on Toast will also be playing four shows in one day on Record Store Day.