Announcement: Twitter Takeover with Out For Tomorrow – Friday May 2nd 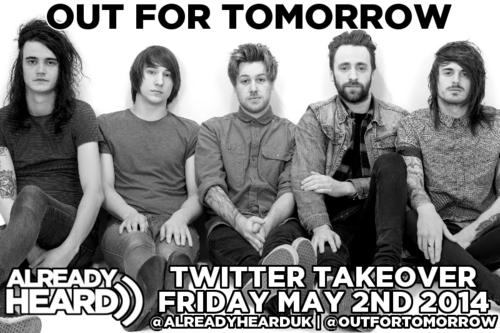 With their debut album, ‘You’ll Find A Way’ set to be released next week, and having made it to the final 15 of the Red Bull Studio Download Festival competition last week, it is certainly an exciting time for Bristol-based quintet Out For Tomorrow.

This Friday (May 2nd) they will be playing a hometown release show at The Gryphon in Bristol. Already Heard will be teaming up with Out For Tomorrow as they takeover our Twitter page. Expect Out For Tomorrow to give fans a behind the scenes look as they prepare for their album release show.

‘You’ll Find A Way’ by Out For Tomorrow is released on 5th May.

Out For Tomorrow links: Facebook|Twitter