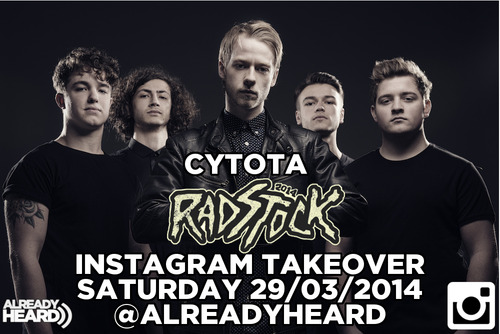 This weekend Birmingham metalcore five-piece Cytota will be playing both days of the Radstock Festival in Liverpool and Newcastle.

We’re pleased to announce the band will be taking over Already Heard’s Instagram for the first day of the festival tomorrow (Saturday).

Cytota are set to play the O2 Academy in Liverpool alongside Funeral For A Friend, Feed The Rhino, Hacktivist, Heart of a Coward and Heights.

So don’t forget to follow Already Heard on Instagram (@AlreadyHeard) to find out what Cytota get up to at Radstock 2014.

Radstock Festival 2014 will be taking place at the O2 Academy in Liverpool and the O2 Academy Newcastle on Saturday 29th March and Sunday 30th March.