Already Heard Track Guide: Versus You – Moving On 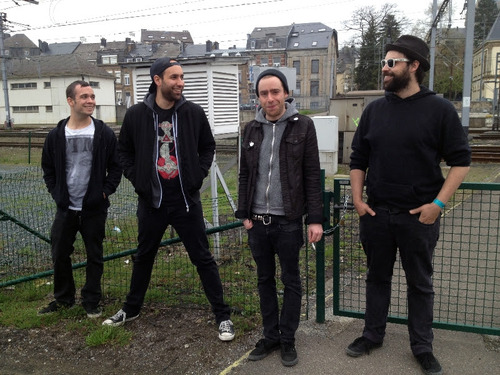 Next week Luxembourg punk quartet Versus You release their new album, ‘Moving On’ in the UK through Bomber Music, and not only that they’re coming for a whole bunch of headline dates.

‘Moving On’ combines power pop elements with a punk rock edge that sees the four-piece sticking to their roots. Tracks like ‘When It All Goes Down’ and ‘A Way With Words’ have a sense of nostalgia, whereaas lead single ‘Be Better Than Me’ and the concluding ‘You Are My Friend’ are filled with sentiment.

To give us a better insight into what ‘Moving On’ is all about, vocalist/guitarist Eric Rosenfeld has provided Already Heard with a track-by-track account into the album.

When It All Goes Down
The lyrics are no big mystery. It’s about best friends and hanging out when I’m not on tour. It’s also about how we’re not only band mates but also best friends. We’ve known each other for years.

This song was written in about five minutes. I recorded the demo acoustically in one take, showed it to the band and everybody liked it instantly.

If The Camels Die, We Die
I wrote this about life on the road, hours and hours of driving to play in front of twenty people. It never really mattered to us to how many people we play though as long as we’re having fun and believe in what we do. It’s also about past mistakes we made as a band and learning from them and move on.

This is a pretty old one so I can’t really remember much about writing it except that I didn’t sit down to write it, it just kind of happened. I hardly ever sit down and try to write a song.

A Way With Words
The words are about a girl that knows me a lot better than I know myself.

The song is one of my favorites because of the Neil Young, Beatles influence of having vocal harmonies in the verses and choruses.

On The Town
The words to this song work very well when you play in front of ten bored girls and boys. For me it’s about helping a best friend out.

We were ready to send the whole pre-production demo to the studio in Sweden when I came to practice with this song. Thank god, we put it on the demo because this might just be one of my best choruses.

Be Better Than Me
The hit? The single? I guess.

It’s a break-up song. I wanted it to be kind of like a conversation between two people that both know breaking up would be the best thing to do but are both not quite sure yet. I was very lucky Hannah Smallbone thought it was a great idea and agreed to sing on this. She did it all in one or two takes if I remember right.

Skinny And Distracted
This one is very autobiographical. If you want to get to know me you can just read the words to this song. It’s about anxiety disorders and panic attacks, pills and drinks.

I believe this is the best song on the record. If ever a song worked as therapy for me, this is the one. There’s a Jack Kerouac quote at the end. Kerouac has always been a big inspiration.

One That Can See
This song is obviously about not fitting in.

I’ve had the chorus for ages but no verse so I took the chorus of another song and used it as the verse for this one. Then I put another chorus as the bridge. This song has three choruses, which makes it the second best song on the record in my humble opinion.

Stay Down Stay Strong
This was written in 2009. I was drinking almost every day and that’s what the song is about.

I think the chorus is a bit too classic rock but I can live with it. Don’t get me wrong I like classic rock but I might not be ready to play some yet. This is definitely the last time we’re going to have a disco beat in a chorus. That’s for sure.

Kitchen-sink Drama
We needed another punk song on the record and chose this one. If this sounds a lot like 80’s punk rock that might just be because The Replacements are a huge inspiration. There’s also some Crimpshrine and Pinhead Gunpowder in there somewhere.

The song is about believing in what you do even when nobody else does.

30 Pills
I wrote this song after reading Jeff Ott’s ‘My World’. There’s an interview with a man called “Pete” who is HIV positive. He explains how he takes pill after pill only to take even more pills for the side effects. I can only hope I opened a few eyes the way Jeff Ott opened mine.

Still I Persist
Written in 2009. The lyrics still mean the same to me today as they did back then. I haven’t changed.

If this sounds a bit like 80’s punk rock again it’s because Hüsker Dü is another huge influence. I thought this was the worst song on the record when it came out, now I think it’s one of the best. Weird.

You are My Friend
Jimmy (Leen – former guitarist) quit the band after the recording sessions. We’ve spent days and days together playing and writing music. I wrote this one for him and wish him the best of luck.

This is a ballad. I love ballads. It think even some of my faster songs are ballads. All my favorite punk bands have ballads and I’ve always been a huge Tom Petty and Neil Young fan.

‘Moving On’ by Versus You is released on 21st July on Bomber Music.