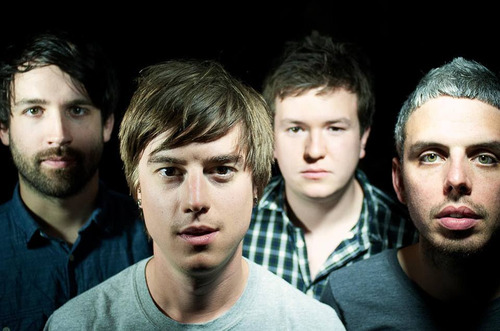 The album sees the quartet take their experimental edge to the next level by producing a melting pot that mixes different styles with brilliant results. There is ferocious punk tracks, post-hardcore tinged numbers and much more on offer.

If you’ve already picked up the record, then you’ll know how fantastic it is. If you haven’t then thankfully Trails are here to give you a track-by-track breakdown of the album. Take it away boys…

Where We’re Going, We Don’t Need Roads
‘Where We’re Going’ is about the trials and tribulations of being in a band; stylistic and monetary pressures. In parallel to that, life’s pressures and society’s checkpoints; the confines and expectancies of a ‘normal’ life. The struggle to balance all of this and maintain a healthy and happy life along with relationships are the things ‘Where We’re Going’ discusses. A punk rock number with a fun end riff.

The lyrical content of this song was formed from Adam’s ongoing struggle to entirely give up smoking. The guitar parts were written with Foo’s in mind and the desire for big simple riffs that would make writing a catchy melody easy. Eventually it turned out to be the hardest chorus to write for across the entire album but we got it done!

When we’re School/Uni age it seems like we’ll be close to all of our friends forever. It’s nice and easy – you all live in close proximity and see each other all the time. As time goes by, people gradually move away and the circle of old friends diminishes, no matter how much you mean it not to. ‘Echoes’ is about friendship, this process, and holding on to the connections you cherish. Musically it is a pop rock tune, perhaps slightly folky, in a 6/8 feel.

Ego’s At The Door
Vocally the verses were hugely inspired by Fcked Up and the anthemic screaming of Damian Abraham. Lyrically the track hits out at egotistical people that inherently lie or grossly embellish everything they say to look better which can be quite frustrating to witness. Just tell the fucking truth! Musically it is perhaps the most straight up tune on the album.

As a teenager, the lyrics and ethos of punk and rock bands had a strong, visceral impact on both my outlook on life and my musical direction. This song is a nod to inspirations, and a hope the the fire their words sparked burns strong and holds true throughout our lives. Musically it’s probably the most pop-punk we venture, again with a banging outro riff.

Newsflash Brainiac, Christ Was Jewish!
Lyrically we laid into religion pretty hard on the ‘Signs’ EP, so there’s less of that dominating these pages, but we had to get one in there! It’s more about the ignorance and denial of followers of the Monotheistic faiths than an attack on the institutions themselves, which was the lyrical focus of previous songs. If we are to progress, then it has to be the people who change the system, and not the other way around. Musically I love this tune. It’s got Foals influenced verses with staccato guitars off-beat hi-hats, and a heavy as fck rocking chorus.

Panthro
The Beatles let Ringo do his thing on Yellow Submarine and so we thought it was only right to let Adam (Rains) do the same on ‘Panthro’. This song is about a break up between a drummer and a van named Vandrew Llloyd Webber and was inspired by a trip Adam took in the van to Brighton in which he scraped Vandrew against a castle wall. They’ve since patched things up (Vandrew has a new door) and Adam is driving him once again. Musically it’s the most quirky tune on the record, a lot of fun!

‘1967’ is about the continual and brutal illegal occupation and expansion of Israeli settlements within Gaza. The mainstream media often frame this as an equal two sided ‘conflict’, rather than a people backed into a corner, forced as a last resort into extremism. The title references the two state solution lines long since disregarded by the Israelis. It’s such a frustrating and saddening situation to watch from the west, seeing such a lack of progress for decades, a clear agenda by the Israeli’s, and our government’s not only full backing of the Israeli government, but military sales (along with of course the Americans) which are in turn used to commit these atrocities. Musically it’s a short, snappy, fast paced punk rock number.

We’re constantly pushed by advertising to mindlessly consume, consume, but to what end? The consequences of this mentality are horrifying, in terms of environmental impact, the lives and welfare of workers, and the financial benefits of this capitalist system to corporations. All the while we’re stuck in the middle either feeling helpless or ignoring the problem. Let’s get cracking chipping away and making little changes before it’s too late! This had to be the album closer, a slow, 6/8 rock epic, with one more rock out riff to finish – we can’t resist!

’ Crooked Trees’ by Trails is out now and can be purchased through Bandcamp.