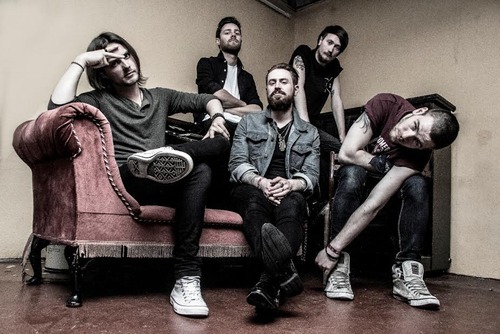 South West Post-Hardcore combo Syren City are set to unleash their new EP, ‘Escape’ next week but as a teaser of what to expect, Already Heard spoke to vocalist Simon Roach and guitarist Adam Hopton as they told us all we needed to know about ‘Escape’.

The EP showcases the quintet’s brand of anthemic post-hardcore which has seen them share the stage alongside the likes of Blitz Kids, The Blackout and Mallory Knox. With songs as bold as ‘Our Disease’, we expect to see a lot more from Syren City in the coming months. Until then here’s Simon and Adam from the band to talk us through the EP.

1. Bleed
Adam Hopton: We wrote ‘Bleed’ late on, after we’d booked studio time to record the EP. I came up with the breakdown riff, it was sort of a spur of the moment thing Once I had an idea for the opening/chorus riff and the rest of the song just flowed. I didn’t think too much about rules in regards to time signatures etc which is why there’s the extra beat in there. The vibe I was going for was post-hardcore circa late 90’s early 2000’s where I draw a lot of influence from.

Si: It’s an account of addiction and the gratifications and frustrations
that go along with it. It has a distinctly darker edge to it. It’s an
incredibly personal song, so it immediately became a favourite to play live.
The more of yourself you put into a song the more it comes out in front of a
crowd. Todd Campbell, our producer at Stompbox HQ has a lot of live
experience from playing with Straight Lines, Dopamine and Phil Campbell’s
All Starrs and understands the importance of capturing the live energy in
the recording process. This is why we thought he was the perfect producer
for the EP, and he has helped us get that raw energy on the record, especially, I feel, on ‘Bleed’.

2. Our Disease
Adam: Ian pretty much wrote this from start to finish with the exception of
the breakdown riff that I came up with separately and it just fit in with
this song. The idea behind it was to have a fast and punchy song that got
straight to the point and just big riffs throughout.

Si: I wrote the lyrics as an ode to the weird and wonderful people I grew up with and that I’m currently surrounded by. I am privileged to have been
constantly around creative, driven and talented types my whole life. I’ve
known some of the most ambitious and gifted people out there, yet almost all have their vices. Whether it be being a complete wreckhead, emotionally
turbulent or socially inept. These characteristics have always been inspirational, and their vulnerabilities have always made me love them more.

3. Fire in Your Name
Si: ‘Fire in Your Name’ is written from the point of view of a homosexual
within the walls of the Westboro Baptist Church. It’s about someone coming of age, realising that the church of which they are a part is wrong, and them opening their eyes to the bigotry and hypocracy of the propaganda they have been fed. We sampled some of Fred Phelps’ sermons before he passed away and included them in the middle eight. It’s something we feel strongly about so we felt the need to put it into a song.

Adam: This song was also a full on collaborative effort whereas most of the time either Ian or myself will get the template and bring it to everyone
else. The middle eight in this song is probably my favourite part to play
live.

4. Long Way Down
Si: ‘Long Way Down’ is a song about overcoming personal demons in many forms. It is from the perspective of people in different walks of life. It includes someone overcoming depression, someone in the midst of war and someone pondering the unfairness of life.

Adam: We’ve had this song done and ready since we released our single ‘In The Ashes’ and have been playing it live for quite some time. We decided to put it on the EP because we feel it deserved to be recorded properly. Again, this is mainly an Ian song that the rest of us chipped in on but it showcases each of our individual styles quite well with Ian’s lead parts and Armour’s bass runs in the pre-choruses, Louis just nails it all the way through.

5. Asphodel
Si: ‘Asphodel’ was probably my favourite song to write. I had a vivid dream after reading Dante’s ‘The Divine Comedy’, so I jotted down what I saw and what occurred. It’s about a journey through the afterlife, viewing the circles of hell, making my way through purgatory. The music represents the journey through the chaotic underworld, through Purgatory and to the edge of Paradise. When the song breaks into the clean section, the antagonist is standing at the gates to ‘Paradiso’. The line “To alter my decline never crossed my mind” is me realising that given the chance to take back all my sins and repent, in that situation I may not, and plummet straight back down. Hence the chant “Stone me, I’m sorry for nothing” as the song ends.

Ad: We decided to throw a curve ball and say ‘Fuck you’ to choruses and just pile on riff after riff after riff. Ian, again, did most of the work guitar
wise but I insisted on having the quiet part going into the big sing along
part at the end. I think this song is just something to get dirty to at
gigs and stuff. Just let loose and rock out!

‘Escape’ EP by Syren City is released on 15th September.