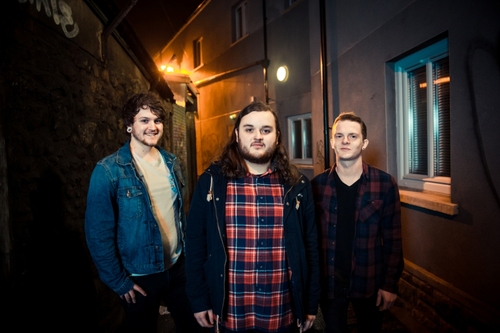 Next week South Wales progressive alt-rockers Stars & Flights unleashed their new record – ‘Moral Colour.’ It’s a monstrous album that has dazzling guitarwork and infectious melodies from start to finish, with a refined post-hardcore undertone that adds edge to the bands sound.

To give you a better insight into ‘Moral Colour’, vocalist/guitarist James Davies has wrote up this track-by-track guide especially for Already Heard.

Moral Colour
‘Moral Colour’ was actually one of the last few songs that came together for the record – we knew we wanted a big riff to open the album, and we’d been planning on the drum intro for a while. After a few of the core riffs had been written, the rest of the track came together in a couple of days. I liked the idea of having the title track as the first track on the album, so it sets the tone, and the overall theme of the record. Lyrically, it deals with the idea that it’s our own choices and decisions that lead us to where we end up – and that these choices, decisions and past mistakes form your ‘moral colour’.

Fairweather
This was the very first track that was completed for the album, and it was the first one we played live. The main riff had been knocking about for a while and we didn’t really know what to do with it, but it just clicked and set off the creative process for the rest of the album. The song talks about addiction, in its many forms, and how it can take hold of and consume you.

Bitter Hands
I was actually a bit worried about this track at first because it’s super poppy, but it turned out to be one of my favourites on the record! We released a video for it in May (filmed by weCreate) and it’s had a great response so far, so we’re really happy with it. It’s probably the happiest, most positive song we’ve ever written. The entire album is actually a lot more positive than our previous stuff, it’s nice to play something more upbeat for a change!

Paper Roots
Before we wrote ‘Moral Colour’, this was set to be the title track of the album – the record would definitely be very different tonally if it had been. This is one of the darker-sounding songs on the album, and takes influence from the darker side of bands like Far and Million Dead. It also features the only guitar part not written by me in our whole catalogue – the middle section riff was written by Brad (Ratcliffe, drums)! This track also contains one of my favourite lyrics from the album; “I’ll write you a letter that will stain my hand”.

Glass House
This song took a while to come together vocally. I had ideas for the verses that were a bit weak, just didn’t have any weight to them and sounded lifeless. It took Chris (Coulter, producer) to kick me up the arse during the tracking of the album to write something we were actually happy with, and I couldn’t be happier that he did! Lyrically this track talks about the idea that, if you’re open and honest with everyone, you’ve got nothing to hide. No-one can tell your secrets or publicise your mistakes if you’ve already done it.

Tired Nightlife
If I had to choose, I’d probably say that this is my favourite song off the album. It had the working title ‘Bastard’ because it was such a fucker to get right when we first wrote it. This track has some of my favourite drumming and bass playing on the album too. The lyrics are essentially a romanticised view of a night out, in my approximation of the Springsteen method of romanticising everyday life and people. I basically tried to capture that feeling you get when you’re pissed, when you get all deep and poetic, but really you’re just pissed.

Repeater, Repeater
Lyrically this started as being about a habitual liar, but as I wrote more and more I realised it was about domestic violence. Despite the heavy subject matter, the chorus contains what is probably one of the catchiest riffs on the record. At The Drive-In were a big influence on this song – that kind of loud, abrasive rock with a melodic edge. The chorus has got, in my opinion, one of Kierran (Tomkins, bass)’s best basslines out of anything we’ve ever done. I can’t wait to start playing this one live!

Dearest On Show
This is a twisted love song; I’m not going to go into it too much, but there are enough clues in the lyrics for people to guess what it’s about! It came about extremely quickly – we basically jammed on the opening riff and improvised the changes until a song was formed. It reminds me of ‘Release’ by Pearl Jam – kind of brooding, slowly building up, until the pay-off at the end. This track was the dark horse for us. We finished it days before we went into the studio, but it turned out as one of our favourite songs on the record.

Head Full of Static
This is definitely the ‘techiest’ song on the album, there’s a fair bit going on. We’ve reined it in on most of the album compared to previous releases, so it was nice to chuck everything in on this one. It definitely shows the influence that bands like The Fall of Troy and Rush have on our music in that there are a lot of notes, but it still uses a traditional song structure and it’s still about the chorus. It’s a pretty fun song for us to play! The lyrics are kind of a story of a young couple, in which one of them wants to leave their small town and set out for a bigger, better life, and the other basically says “You can’t delay the inevitable, we’re stuck here”. It’s a story of disappointment and disillusionment, really.

The Roman Way
This is another pretty positive sounding song! The lyrics look to the future with a positive outlook, in contrast to the last song, basically saying it doesn’t matter if mistakes are made, keep going, that sort of thing. This track features classic backing vocal “Has” in the chorus, something that I am landed we found a place for. The bridge features some pretty nice interplay between the guitar, bass and drums as well, which is always nice. We thought it’d be great to end the album on a positive note, and this track fits right in with that.

‘Moral Colour’ by Stars & Flights is out 16th June on Ghoulish Records.