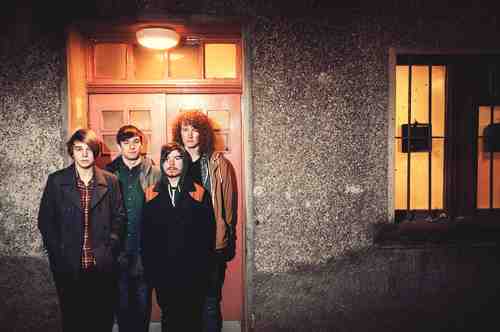 Last month we rewarded Glaswegian quartet So Many Animal Calls with a 5 out of 5 review for their new EP – ‘Burden’.

It’s a collection of refreshing and vibrant songs that are catchy and melodic. Or if want to be more direct – it’s bloody brilliant!

We love it so much we poked and prodded Sean McKenna from the band to give us an insight into ‘Burden’. Thankfully he gave in and provided us with this “Track Guide” feature.

From The Sick Bed
This was the first song we wrote for the EP. It came together very quickly musically which in retrospect is odd given its structure – none of us realised at the time how odd it is in that sense.

The lyrics relate to a few family members I had who were sick at the time – how you would give anything to relieve them of what they were going through (“If I take this off you, and put it on myself I would”). It was also about how upsetting it was to see them almost give up at times, to have to depend on us after them taking care of us all through our childhood. My great aunt used to keep all these newspaper clippings from when I was mentioned or my picture was printed for playing gigs or for school shows and she’d even keep things like interviews by Franz Ferdinand (she would refer to them as “that group that you like”) for me to read later. (“There were clips from all the local papers scattered all around with pictures of me from my youth, when you would care for me instead of me caring for you”).

My Blood’s Not Mine
This is when something that is supposed to better you has the completely opposite effect. When it rots you physically and mentally, you really don’t see the benefit of it working, and when you begin to regret ever starting it in the first place.

I chose the repetition of the line “The truth is I’ll never get over it” to really drum in how bad it could be.

Chromatography is for Cool Kids
“We’ll do it while it’s still love, instead of just all we have”. This song is about having the respect for a relationship to cut it short, to end it while things are still positive rather than dragging it out and clutching onto something that is petering out. It’s hard to admit when its realised but ultimately for the benefit of everyone involved it is for the best.

Stories
Having the ability to put on a brave face is much easier said than done – that’s what ‘Stories’ is about. It’s about finding it hard to accept the reality of seeing a loved one having changed so much through illness and how I selfishly avoided visiting for a while. I would revert back into shy child mode and just find it hard to say anything or make conversation. I would go incredibly quiet and think the worst. (“The worry seeps through, the sadness can’t be held in”)

‘Burden’by So Many Animal Calls is out now on Bloc+Music.