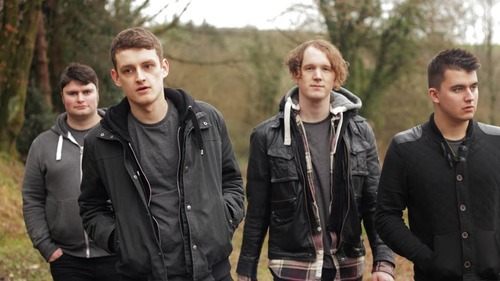 Later this month rising Bristol quartet Oh Captive release their debut EP – ‘Advance Creature’. With their mix of alt-rock and post-punk, Oh Captive have been compared to the likes of Coheed & Cambria, Biffy Clyro and Twin Atlantic.

‘Advance Creature’ offers four slices of refined and stirring alt-rock that puts them on the list of “ones to watch” in the coming months.

Beds of Many Ghosts
‘Beds’ is my personal favourite track from the EP. The speed at which the track came together made us realise that we were all on the same page musically, so the writing process was quite exciting for us. The song has a lot of energy which makes it great for us to play live too. The EP itself focuses a lot on my experiences and ‘Beds’ is about one person in particular. I won’t name them, I’ll just let everyone I know get paranoid instead.

Terrible Live
‘Terrible Lives’ was started by Curtis (King – Guitar). He came up with the chorus riff and everything else just seemed to come together after that. The song really builds towards a bit of an angry ending. It’s definitely a display of our heavier influences, but it’s about as heavy as we get musically. It’s another one that’s really fun to play live. The ending gives us a chance to jump around and interact with the crowd. The song is about fighting to keep something and eventually realising you’re better without it.

Advance Creature
This is the quietest track on the EP but at the same time I think the chorus manages to make it the biggest sounding. It’s about different types of relationships, unfortunately focusing on a lot of negative things. It’s about as close as I get to writing love songs! The title has nothing to do with the track really, ‘Advance Creature’ is a name we gave to a dance that a friend of ours did to this song. I could describe it in more detail but I risk making us look a bit mental. You just need to know the dance was so good that we named our entire EP after it.

Retreat Being
‘Retreat Being’ stands out from the rest of the tracks for me, it’s definitely the most different but still retains our sound. I’m personally a big fan of progressive music so this song and it’s different sections are a very slight nod to that. Lyrically the song is about struggling and frustration, not being able to get over or move on from something.

‘Advance Creature’ by Oh Captive is released on 28th April.