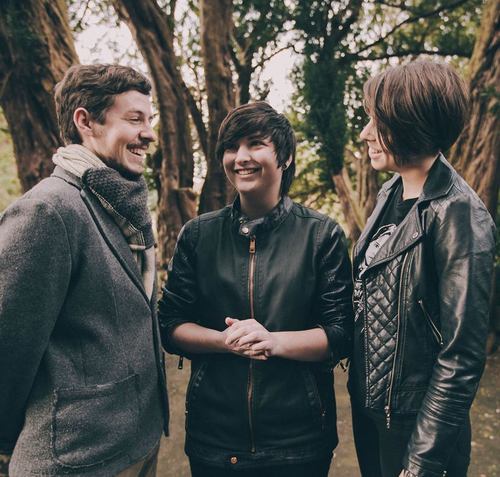 Recently Dublin band Kate’s Party released their debut album – ‘Hollow’. Combined by their love for 90’s pop-punk, ‘Hollow’ takes that influence and mixes it with an indie pop flavour.

Sarah Corcoran from the Irish four-piece took some time out recently to give us a track-by-track walkthrough on ‘Hollow’ especially for Already Heard.

When we originally decided to record this set of songs, we intended it to be an EP, but as the studio date drew closer we realised we had enough songs for an album and so decided to record ‘Hollow’. It was recorded over 7 days in a shed in Co. Wicklow in Ireland and we pushed our creative boundaries experimenting with different styles of recording than we were used to, and even playing different instruments which were out of our comfort zones. We are really happy with how the album turned out and I think our growth and maturity is evident as the album progresses. The last three songs written were ‘Cougar’, ‘Welcome To Seahaven’ and ‘Hallenbad’ which are our favourite tunes on the album.

Welcome to Seahaven
Even though this is the first track of the album, it was the last track to be written. Sarah brought the idea forward around a year ago, but it just wasn’t coming together properly. We took it apart, switched it around, messed with the tempo, but in the end we had decided to leave it. But at the start of January, we decided to blast through it again, and it all seemed to click and fall into place.

The name of this song is derived from ‘The Truman Show’, and the lyrics are inspired from it’s idea of being watched, and nothing being as it seems. This track is one of our favourites, it’s unusual because there is only 1 verse at the start of the song. With sharp stabbing guitar, followed by its slow drawn out notes for the chorus, it’s a song that is constantly changing throughout and keeps you on your toes.

Pockets
This song has an upbeat and positive vibe, driven by bass throughout the verses, it’s almost Alkaline Trio-esque in that it sounds upbeat but it’s not about the ‘good time vibes’. It’s a fun catchy song, using delay, guitar riffs and a feel good bass line that all slowly fade out in a Jimmy Eat World style instrumental ending.

Paper & Glue
This is a drum and bass driven track, opening with just those two and setting the vibes for the song, and coming back in alone on the second verse. It’s a 90’s inspired song with a steady beat, catchy choruses and a catchy riffs. This song ends with vocals only between Sarah and Niamh after the music has cut out, giving it a Talking Heads kind of feel.

Cougar
This is easily one of our favourite songs on the album, it came together so naturally and quickly. Another dream writing session, like Bike For Three. It was originally a song Sarah wrote nearly 2 years ago, but she changed around the chords and everything else gelled to it so perfectly. I really think this song says just who we are and what we’re about. If someone was to ask who are Kate’s Party I would point them right to this song.

Pace
‘Pace’ was originally the start of ‘End Scene’, but we decided it would be more interesting to have an instrumental track on the album, by doing so it separates the songs, leaves a break on the album, and also creates the intro and feel to ‘End Scene’. It was very fun to create, Fiach scratched and scraped cymbals and Niamh created feedback and sounds from her guitar.

End Scene
This track is different to anything else on the album, and similar to Picture Me, it has strong roots with our 2012 EP ‘Back Down’. It’s a song that starts with an aggressive or argumentative nature with the 2 voices almost shouting back and forth at each other. Eventually it gets worn down and down, and results in a very sincere refrain that references all the way back to the previous track ‘Pace’.

Unfamiliar
‘Unfamiliar’ is another favourite and has a bit of The Cure vibe to it. Using delay and phaser pedals, the lead guitar comes in and out with feel good verses and a catchy riff. This song has undergone a few changes over time, but we’re very happy with the finished product.

Picture Me
This song was written back in the days when Kate’s Party was acoustic. It’s a pumping, energetic song, that kicks off and runs at high energy until the final notes. This album is a lot different to the EP we released in 2012, our writing has changed, but we are still influenced by the same bands and issues, so it’s nice to have a bit of our old sound featured on the album.

Bike for Three
This is another of our top favourites, ‘Bike for Three’ is a haunting song, and was written in just over an hour. We were having a last minute practice before a gig, and Sarah started blasting out these chords, we played along for around 10 minutes, cut it down to size and played it that night at the gig. It was one of the easiest and quickest songs to write, but we have tweaked it here and there over time using delay, reverb and vocals here and there.

Hallenbad
Another track that was finished in the last sessions before album recording began. It started off as a slow ambient jam, that lasted around 10 minutes. We enjoyed it so much that we had to do something with it, it was the perfect note to end an album on, so it was structured properly and fit perfectly as the goodbye song.

‘Hollow’ by Kate’s Party is out now.