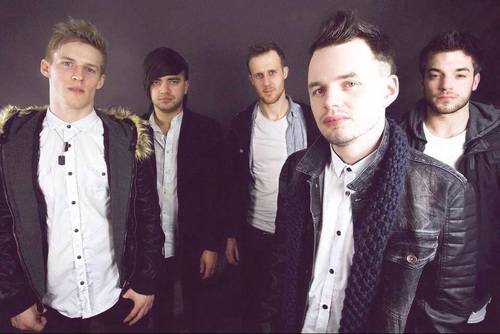 Earlier this month rising UK rockers I Divide released their much anticipated debut album ‘Last One Standing’. It is a record that exceeds expectations by combining the bands youthful approach with an ambitious melodic alt-rock sound.

Having entered the UK rock album chart this past Sunday, things are certainly looking up for the Exeter five-piece.

Before they kicked off their current UK tour supporting Blitz Kids alongside Fort Hope, guitarist Josh Wreford took the opportunity to talk us through ‘Last One Standing’.

Follow Me
‘Follow Me’ is a tale of grasping hope after being knocked down. It’s actually the first song we wrote for the new album, and also the track we’ve been playing live the longest. We first debuted the track live in May 2012 at Slam Dunk festival, and it has actually been a strong part of our set since. It’s great to finally get it out as part of an album.

Tell Me Something
‘Tell Me Something’ is another upbeat rock song through and through. The song takes the stress of being in a band and never knowing what’s wrong the corner, and translates it into a fictitious relationship. I really love the power we managed to get in the build up section before the last chorus. I think it perfectly resembles keeping emotions locked down until you just can’t hide them anymore; “You take what you want with no care at all, you push me around leave me feeling small.”

I’m Not Leaving
‘I’m Not Leaving’ is our latest single off the album. This was actually the last song we wrote for the album. It actually was nearly never made. It came after Tom and I (Josh) were sat down listening to our demos a few weeks before hitting the studio and thinking to ourselves (something’s missing.) We wanted to write a big singalong rock song that everyone could relate to. I hope we managed to achieve that.

Monster In Me
‘Monster In Me’ has already been deemed the ‘heaviest song on the record’ but also it seems to be a lot of people’s favourites. A song focusing on a man’s demons and how he keeps them hidden from those around him “Trying not to free what is holding back the monster in me.” I feel the theme really fits the anger in the music.

Cold At The Bottom
‘Cold At The Bottom’ was one of the first songs we wrote for the album as well. In fact, ‘Follow Me’, ‘Cold At The Bottom’, ‘Run Away’ and “Let Go’ were actually all recorded in Red Bull Studios in London 6 months before the rest of the album. This was a track that we didn’t really buzz about before we went into the studio, but I think we were all blown away by how it came together. Another favourite by our fans. Gotta love that bouncy chorus!

Living In A Hurricane
Tom and I wrote about 400000 different chorus ideas for this song before one finally stuck. We always make it our main goal in a song to make the chorus as catchy and memorable as possible, after that, the rest of the song will usually flow a lot more comfortably into place. The lyrics in the track refer to our crazy, busy, risky lifestyle being in a band, but how we wouldn’t trade it for anything.

27 Down
’27 Down’ probably has the deepest meaning out of all the songs (and is one of my personal favourites.) I wrote that track one weekend after reading all about the Sandy Hook primary school shootings in America. I was watching an interview featuring a pro gun politician saying that if they had more guns in the actual school, this wouldn’t have happened. The lyrics and melody came very quickly in my head after that. I also find a song easier to write when I get really emotionally driven.

Run Away
‘Run Away’ is another track we’ve been playing for a while live. It’s always a crowd favourite. It mixes heaviness with melody, and an extremely bouncy chorus to top it all off. It’s one of our favourite songs to play live because of the groove and singalong sections.

Say It Isn’t So
‘Say It Isn’t So’ was another track that was written only weeks before going into the studio for a second time. It’s again about not letting a bad situation rule your life. "Say It Isn’t So, it’s hard to speak when words get stuck in my throat.” I love the chorus in this track. It’s more melodic than a lot of songs. We even have a gang singalong section in the last chorus, which I feel helps to signify how this problem can somehow affect so many people.

Let Go
Another of the original four. We wrote this song because we wanted to try something a little different. We picked a different key to write in and started jamming as a band. The music is funky and the message is clear. I think this track breaks up the album really nicely before the big finale.

Look At Me Now
‘Look At Me Now’ is another of my favourite tracks. I wrote this song with Henry after a gig in Newcastle whilst we were just sat at a piano, with henry jamming on an acoustic guitar. The music is completely different from the rest of the songs. It’s really stripped back and just let’s the lyrics/vocals carry the message. The track is a big f**k you to those who have doubted us and told us to give up. I hope we get a chance to play this track live one day in front of thousands of people where we can really have a chance to bring the words to life.

‘Last One Standing’ by I Divide is out now on Destroy Everything.