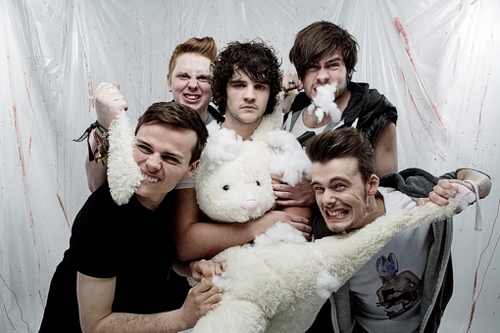 Later this month, Reading quintet Borderline:FIRE release their new EP – ‘This Trojan State’. With their roots in indie, the EP sees them developing their sound to produce a collection of songs made up of massive guitars, soaring choruses, plenty of hooks and subtle synths.

Ultimately the melodic hard rockers show tons of potential with ‘This Trojan State’.

To give fans and new listeners a preview of what to expect, Borderline:Fire have produced a track-by-track guide to the EP.

MARK UP
‘Mark Up’ was written with our favourite way to write a song, starting with a big riff. We always had this song in mind as the opener for the EP as it sets the tone perfectly and instantly. It’s an attention grabber. It was probably the first song we wrote with Stack as almost an official part of the band which is why there’s the direct question and answer sections in the verses, combining synth with the guitar riff. It was also the time we decided to bring Jonny’s vocals into focus a lot more, giving him the pre-chorus to sing as well as the big harmonies in the chorus. We spent a lot of time wanting to add extra bits into the middle 8 section, but on the last day in the studio actually cut down this section to make the song slightly shorter and more to the point. In terms of lyrics it starts out almost light-hearted questioning whether you can put a price living, or whether budgeting yourself religiously 24/7 is a waste of living. Jonny’s vocals in the pre-chorus are almost satyrical giving the idea of escape. The end of the track was something we all worked on to make it as big as it could be.

CHAINS
‘Chains’ was one of the last tracks we wrote and probably one of the quickest we’ve ever written. Jamie had come up with an idea for a full track, lyrics and chords. After giving this to the band we fiddled with the parts adding the stop into the chorus… I think we quickly realised that this was going to be one of our most commercial and catchy tunes. The synth lead in the chorus wasn’t written til we got to the studio, it was originally recorded as an extra guitar part and then found a synth sound that worked with it. The lead part turned out just as catchy as the chorus and the rest of the track, which we really liked.

NICKI
‘Nicki’ is an old song that has evolved over quite a long time. It was originally written as the B-side to our single ‘I Wanna Go’ and we did have a recorded demo online for quite a while. The lyrics are all about hierarchy and give something for a lot of people to relate to by hating their boss at work. The chorus lyrics “The Midnight maker of misery” and “The Nocturnal Colonel” (all relating to night-shift work) are used at light metaphors. It’s got a very feel good atmosphere to the song, anyone driving home from a bad day at work can turn up the track and let off some steam.

TROJAN
Trojan was the most difficult song we’ve probably ever written. We had chords and lyrics and knew that this track was going to be one to build from a quiet start. I can remember rehearsing repeatedly changing the song and it wasn’t until one rehearsal we all actually decided just to sit on the floor quietly and see what came out. This was when we decided to add an extra verse at the end. We were all sitting there toying with the very last line. We had the name for the EP ‘This Trojan State’ and after a while Jonny turned around and said to Jamie “We’re all Trojans in this war” which finished the basic structure for the track. The track was then torn apart further in the studio. We wanted it to be mainly a studio track but everyone had different ideas. Our producer thought it should sound like a Beyonce track (no idea why) and one of the engineers wanted to focus on a style by Thrice. Unlike the other tracks we didn’t have a set structure at all when Chaz went in to record drums. He ended up recording each of the parts seperately, not entirely knowing whether they were going to be used. We decided before going into the studio that this track was going to have electronic drums and these were added once the structure was confirmed. The electronic drums help distinguish this track from all the other songs on the EP. The lyrics almost initiated a turning point for the EP starting with tracks that were questioning and debating, flowing into Trojan which almost feels like a down-point but ending with a decision, taking the rest of the EP into an action phase.

SPEAK FOR ME
‘Speak For Me’ was again one of the older tracks. Stack and Jamie originally wrote the song just on keyboard and acoustic guitar in Stack’s back garden before bringing to develop the parts and structure fully. The track sheds a more positive light across the EP with a sense of proving yourself maybe to your family or friends or all those people in your life that you might perhaps never see again or want to… The track grows through the verses and we wanted to particularly focus on vocal harmonies for the middle 8 section. We toyed with the idea of almost choir-style “Ahh’s” but these were then replaced with the more sombre Cello sound. This track was probably the biggest surprise for us. After recording we the demo, we didn’t think it would end up sounding as strong as it does.

BRAINWASH
As a band this is probably our favourite track. It’s the heaviest track on the EP. This song is really a sign of all of our influences from heavy rock to electro, with the electro side of things really coming through at the end with the huge synth drop. This track includes a lot of gang vocals which were really fun to record. For the gang vocals for “We want the truth,” we had the image of one guy in the pub talking to a group telling them that he wanted the truth. Then a second guy turning and agreeing, before long the chinese whispers had got round the pub and they all wanted the truth, which is portrayed with the gang vocals building… The lyrics for this track were written between Jamie and Stack focussing on the metaphor of tricks and games. These metaphors were then replicated in our artwork for the EP. The idea in the chorus comes down to not conforming and following the crowd. Not playing with your life by waking up 30 years down the line still working at the office job you left college for. Waking up and realising the possibility that you may have been Brainwashed into thinking that this was normal, and to be different and do something you love it’s not so bad after all. You’ve just got to fight for it.

‘This Trojan State’ by Borderline:FIRE is released on 23rd September.