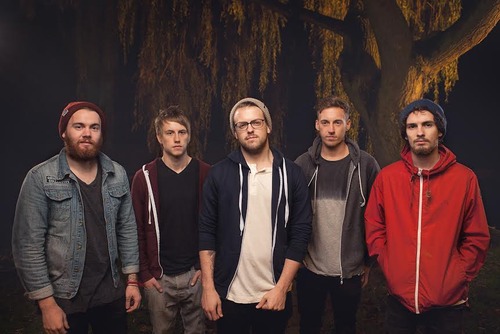 Next Monday (March 24th) Derby post-hardcore five-piece A World Defined unleash their new mini-album – ‘In Absence’. The six-track release is an engaging set with a grandiose approach to songwriting.

Having premiered the bands video for ‘Brothers’ last month, Already Heard has given the opportunity to A World Defined to talk us through ‘In Absence’ track-by- track.

When we began writing ‘In Absence’ we hadn’t decided how many tracks we wanted the release to consist of, but we all very quickly agreed that we wanted this mini-album to be more than just a collection of songs; we really wanted every song to work off each other and flow as a whole, cohesive piece. As it turned out, writing ‘In Absence’ as a collective was far more exciting to us than writing a single song on its own. One of the only rules we have is to have no boundaries within our music, we want to have our own sound and originality. We wanted the release to be full of contrasts and different types of songs.

Recording is one of our favourite parts of being in a band and we like to do things slightly differently. A lot of music these days is generic, over-produced material with no human error, passion or real tones and sounds. We recorded the release in a manner of different methods. We wanted some sections and songs to sound produced and tight whilst others we wanted to sound real, human and as if you are there in the room whilst it was being recorded.

1. June
We wrote ‘June’ specifically as a record opener, using electronics in the intro to bring the song in with a bang and ensuring it has high energy and constantly flows to the end. It’s probably one of the most “produced” tracks on the record, as we felt it helped the vibe of the track. The chorus’s sound big and tight, whilst the verses are very drum-driven, contrasting with the guitars that are allowed to sound human and partly rough. Lyrically, June’s written about living life to the full and without regrets, alongside the person you love, to ensure that when your time comes, you’re at peace. We love to play this song live due to the passion and energy it gives our set.

2. In Absence
‘In Absence’ is the title track and actually the last song we wrote. It is the first point in the record where we introduce a piano and other instruments that may not be expected. We recorded this song with crunchier guitars and the song drops out to powerful drums, overdriven bass and various forms of atmosphere throughout. Coming straight after ‘June’ it is a lot less ‘produced’ and therefore we feel contrasts nicely and progresses the record. As well as the piano, we used a tambourine and subtle electronics in this song. Vocally we tried to create a catchy chorus full of hooks and harmonies. Lyrically the song is an opposition to the force fed nature of certain beliefs and the pressure which can often result from this.

3. The Void
This was the first song we wrote for the record and was initially intended to be a single. We believe the song contains all the elements that we like to represent our band. There is a powerful chorus with strong vocal hooks, a deep bridge filled with atmosphere, blues influenced lead guitar and a very real recorded sound, there are parts where the listener can feel like they are in the room. Lyrically this song is actually about the effects of death on our lives and how we deal with it. Its deeper meaning is to say that we are not alone and things will get easier.

4. Gild The Lily
This is one our favourite tracks to play live and also on this record. We wanted this track to sound rough, raw and ready. The song is a recurring acoustic guitar and vocals for just short of half the song. We wanted to leave listeners unsure as to where the song was going to go and what was going to happen next. There are a lot of contrasts within this song, when the drums and blues-guitars kick in, the dynamics change a lot only to then drop out again and come back hitting hard. Writing of this song was based on being as simplistic as possible, essentially it is based around 2 chords with only one notes difference between them. The structure is entirely based around vocals and develops in accordance. Lyrically it is about a woman’s morality and staying strong to yourself. No matter what comes your way and no matter what happens, don’t change. By using different tones and recording techniques it is mad how a song can develop from two chords.

5. Brothers
‘Brothers’ was the second song wrote for ‘In Absence’ and probably where everything started to take shape. We love play this song live, it’s probably our favourite! This is going to be the first single from the record and a video will be released on February the 24th. The song is all about the meaning, brothers. The chorus is full of energy and again we tried to create hooks both vocally and musically. The drums definitely run this song and we concentrated a lot on the writing of the guitars and bass, so that sections built up and dropped out at the right times. The song ends on a powerful note and with the use of some electronics and samples this was written to be a strong climax. Vocally the song is about what friends can do for each other, no dream is too big and if you stick and work together; anything can happen.

‘In Absence’ by A World Defined is released on 24th March.