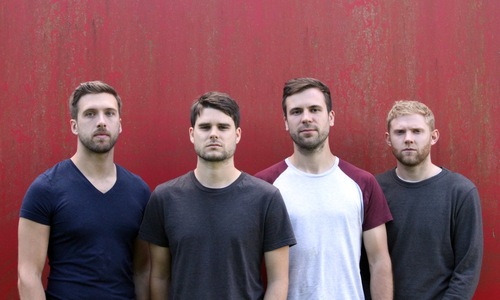 In this day and age it’s far too easy to pigeonhole bands into a certain genre or “scene” however for Flights that is not the case. Their debut full-length, ‘History Be Kind’ proves to be an expansive collection that varies between angular moments (see ‘The Ghost of Things’), melodic bursts (‘Yellow Bentines’) and the occasional hint of post-rock. By combining various elements, ‘History Be Kind’ is a captivating listen that is layered and smartly produced. At times it overwhelms you and you can’t help but applaud the quartet for they’ve achieved on the course of ten songs.

To find out more about ‘History Be Kind’, we quizzed Joel Pearce from the band. He discussed the making of the record, bot being tied down to a certain genre, and more.

AH: Hi. For starters can you introduce yourself and your role in Flights?
Joel: Hey, I’m Joel and I sing and play guitar in Flights.

AH: For those who haven’t heard of Flights before, can you bring us up to speed on the bands history and your sound?
Joel:
We formed back in 2009 after meeting through school, university and various friends. We then released a self-titled EP in 2011, a few singles in 2012, and the rest of our time has been spent touring or writing and recording our debut album.

I don’t know if we’ve got a particular ‘sound,’ just drums, bass, big distorted guitars, cleaner guitars and some singing.

AH: Let’s move on to the album – ‘History Be Kind’. This is your debut album that has been a longtime in the making. How does it feel to finally get it out there?
Joel: Yeah it’s a relief! Like you said it’s been a long time in the making so we’re just excited to finally be putting it out. I’d like to say that a lot of blood, sweat and tears went into this album…but it’s mainly been tears.

AH: In comparison to previous releases, how has the band grown on ‘History Be Kind’?
Joel: Well for a start we’re all five years older (sadly no wiser) than when we first started writing so our tastes have changed. That’s definitely filtered down into our music. On ‘History Be Kind’ we tried to expand upon what we’d already done on previous releases without aping them. We also wanted to focus more on melody than we had in previous releases, be it a vocal line or a guitar motif – we didn’t want to throw something in just because we could, we wanted to it compliment the song.

AH: What was your initial aim when you began work on the album?
Joel: I think the initial aim was just to write a body of work that we would be happy with and for it to ebb and flow along nicely. We wanted to create something that was for ourselves and didn’t pander to any trends.

AH: During the recording of the album Joe (Newcombe- guitar/vocals) relocated to New York. How did that effect the making of the album?
Joel: Yeah he buggered off and left us! In fairness Joe is the engine behind Flights and whilst he was over in New York things slowed down a bit. The upshot of this is that we all had time to step back, listen to all the songs, evaluate what was working and what wasn’t and think about solutions. One of the ways we work is through a process where one of us will write and record a short demo, then send it to the other guys to see if anyone can expand on it – we were still able to do that. In all honestly the thing that affected it most was that we couldn’t just hang out as mates.

AH: From hearing the album, it’s difficult to tie down the bands sound to a certain genre. Do you think it’s healthy for a band to be versatile?
Joel: Personally speaking, definitely. It’s obviously differs from band to band, and I’m sure not everyone wants to jump between various textures and shades, but for us it’s a key reason why we’ve been able to keep playing music together. It’s refreshing finishing a song and not feeling that it governs your next move. I mentioned earlier that tastes change over time and it’s great to incorporate that into new tunes rather than feel you need to start up a side project or sacrifice things. Music, for us, is about ignoring genre pigeon-holing and embracing the challenge of making disparate elements and influences work together.

AH: In the run up to the release you’ve been posting a couple of songs from the album online. How have they gone down with fans?
Joel: They seem to be enjoying them which is great! Some of the songs have been around for a while now so they will have heard them at shows but it’s nice to put new stuff out and still keep your core fans happy.

AH: For those who have yet to hear Flights, why should they go and check out ‘History Be Kind’?
Joel: Erm, good question! I’d say ‘History Be Kind’ sits between progressive and post rock genres so if you like either of those give it a spin. It’s the best work we’ve done and we’re all really proud of it!

AH: What are your plans in terms of touring?
Joel: Another good question! No plans at the minute due to various commitments but we’re working on getting a string of shows together in the new year.

AH: Do you have any closing comments for the Already Heard readers?
Joel: Keep supporting independent UK music; there are tons of amazing bands doing brilliant things. Thanks for taking the time to read this. And buy our album!

‘History Be Kind’ by Flights is out now on Scylla Records.