Already Heard Recommends: Everything On Red 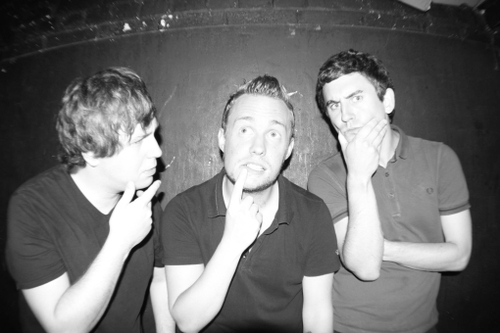 Hailing from the North West of England, blistering punk rock trio Everything On Red have produced a sharp, effective release in their latest effort, ‘Satellites’.

Since coming together in 2007 and having undergone your typical lineup changes, Everything On Red are now ready and raring to go as ‘Satellites’ takes the hooks of Reuben and early Biffy Clyro and combines them with layered vocals, anthemic choruses and intricate guitar work.

Bassist Tom Brown recently took some time out to discuss the bands history, ‘Satellites’, massive choruses, and much more.

Already Heard: First of all can you introduce yourself and your role in Everything On Red?
Tom: I’m Tom and I currently play bass and sing. On previous releases I have played synths.

AH: This interview is part of our “Recommends” feature which highlights exciting new bands. For new listeners, how would you summarise the bands sound?
Tom: Eargasmical. One of the things that we get a lot from people is that we are an exciting band to listen to, and I think this is true. There are no boundaries in the music we write in terms of formulas or genres, we just try to make it as simultaneously interesting and catchy as possible.

AH: Your sound has been described as a “new take on an old genre.” Care to explain more?
Tom: Not sure who’s said that, but I’ll take it! I guess it means wearing our early influences on our sleeve and not being caught up in what is currently seen to be “cool” or whatever. There seem to be so many bands these days that sound almost identical, we are always trying to push our sound in a new direction with each release, whilst never forgetting that it was the love of punk rock music that bought us to form the band in the first place.

AH: You recently released a new album called ‘Satellites.’ What should new and old fans know about it?
Tom: If I were to clamber aboard the #MusicClicheScene I’d probably say something like “The heavier bits are heavier, and the catchier bits are catchier”, but I’m not gonna do that. Both new and old fans should know that it is definitely the best and most well-rounded record we’ve ever produced. It’s recorded with a live feel in mind. There are very few overdubs and no twelve part harmonies, it’s very much the sound of us playing live (albeit a shiny version), which I think gives the record a massive energy.

AH: From hearing the album, it seems having big hooks plays a major part in the bands style. Can you tell us how the album came together?
Tom: As I mentioned earlier I used to play synths in the earlier days of the band, and when Sam (our old Bass player) left the band a couple of years ago, we tried the band in various guises, before deciding that we’d actually written enough quality songs (without really meaning to!) with a guitar/bass/drums line-up, so we just thought yeah let’s go for it.

We all write songs for the band, so some of the songs have come from each of us and some have come together through practice room jams, it’s quite amazing how unified the whole record sounds and I think this shows how in-sync with each other we have subconsciously become. We’ve all improved significantly since the band formed and have learnt to appreciate the importance of a hook, and have learnt to not be afraid to put something simple in if it works! The choruses are the biggest we’ve ever put together, so we’re happy.

AH: For new listeners, what track from ‘Satellites’ would you recommend and why?
Tom: Hmmmm, that’s a difficult question, my favourite track seems to change almost on a daily basis at the moment. I’m currently enjoying ‘Tooth & Nail’ which we’re due to record a video for later this month. The song showcases everything that’s good about the band; it’s got energy, a massive chorus and a crazy bridge! Ask me tomorrow and you’ll probably get a different answer.

AH: What reaction do you want people to take away from hearing ‘Satellites’?
Tom: “OH MY GOD I I HAVE JUST LISTENED TO MY NEW FAVOURITE BAND!!!!”

AH: Having played shows alongside Crazy Arm, Hadouken!, Blitz Kids, Twin Atlantic and Dinosaur Pile-Up. What have you learnt from those experiences and how have you applied them to the bands sound?
Tom: It’s always great playing with good bands because you can learn a lot from them. I guess playing shows like that has increased our confidence in performing live and it’s really nice (and humbling) when fans of those bands say how much they enjoy our sets. Playing those sort of shows hasn’t changed our sound at all though, our sound has developed in the direction we have wanted it to, which is the beauty of not having any external factors dictating how we should sound.

AH: What can people expect when they come and see Everything On Red live?
Tom: Bundles of passion and energy. Also a drummer with forearms thicker than tree trunks.

AH: You hail from the North West (Manchester/Stoke). How would you describe the current local scene?
Tom: The scene in Stoke has the potential to be really decent, there are a lot of people who are trying to help bands and promote live music positively, it just seems Joe Public is not as game for a gig these days as maybe a few years ago. Excessively high gig entrance prices don’t help, but it all comes down to money for promoters, which makes it difficult for bands to get discovered as they’re not prepared to gig as much as they’d like.

AH: Are there any noteworthy local bands you’d like to give a mention?
Tom: All The Best Tapes, Only Strangers, Ghost Trains and Mr5hano19, check them out you won’t regret it.

AH: Following on from the album, do you have anything else in the pipeline in the coming months?
Tom: We’ve got plans to record at least a couple of videos and we’re going back to Knype studios (where we recorded the album) to do an acoustic session with Anthony Weaver. Other than that gigging wherever possible and getting the new album out there to as many open ears as we can!

AH: Finally why should Already Heard readers check out Everything On Red?
Tom: We’re champions of true, honest, unshackled British punk-rock. Also if they do then I’ll personally buy them all an ice-cream.

‘Satellites’ by Everything On Red is available now on Bandcamp.

Everything On Red links: Facebook|Twitter|Bandcamp