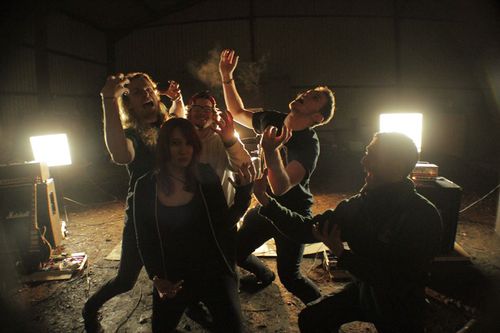 With their latest EP ‘Change Nothing, Regret Everything.’, Woking five-piece Employed To Serve have produced 12 minutes of frantic, unrelenting hardcore that finds the band somewhere between The Dillinger Escape Plan and The Chariot.

Originally formed as two-piece bedroom project between vocalist Justine Jones and guitarist Sammy Urwin, Employed To Serve have been gathering momentum with a couple of EP releases through Grindcore Karaoke, and recently joined Holy Roar Records, a label that has a reputation for releasing some of the best UK hardcore releases in recent years.

Having now become a five-piece with drummer Robbie Back, bassist Jamie Venning and more recently James Jackson joining as the second guitarist, Employed To Serve will be hitting the road relentless in the coming months as they look to following up ‘Change Nothing, Regret Everything.’ with their debut full-length.

In the mean time we spoke to Justine from the band to find out how the band has transitioned from a duo to a quintet and she discussed being part of the Holy Roar! roster, they chaotic yet contained live shows and more.

Already Heard: Can you introduce yourself and your role in the band?
Justine: I’m Justine the vocalist!

AH: Let’s begin with a standard question. Talk us through how the band came together. I hear you were originally a two-piece bedroom project?
Justine: Me and Sammy the guitarist had been dating for a few years and decided to start a recording project for fun. After some interest from different people we decided to take it to the stage and have some fun touring.

AH: Since Jamie and James have joined the band, how has your sound developed?
Justine: We’ve certainly developed our sound a lot more by having more than one musician in the band, the writing process is now more of a collaboration instead of Sammy writing everything by himself.

AH: The new EP, ‘Change Nothing, Regret Everything.’ is your first as a quartet. For new listeners, how would you describe the overall vibe of the EP?
Justine: It’s very angry and raw, we also wanted to give it a live feel so it was predominantly recorded live instead of to a click track.

AH: In the press release for the EP, you’ve described yourself as “miserable Post-Hardcore.” Want to go into more detail about this?
Justine:
We find it really difficult saying what genre we are, our influences are really vast! We just call ourselves post hardcore because we’re too slow to be a grind band and not ‘beat down’ enough to be hardcore, we’re some where in between. We definitely have a miserable undertone to our songs in terms of lyrics and riffs.

AH: Does the title, ‘Change Nothing, Regret Everything.’, have any meaning or message behind it?
Justine:
It’s basically people dealing with working a job/being in a situation they hate just because they’re too lazy or scared to change it. And one day they’ll be middle aged and would have never achieved their goals in life because they’re too stuck in their ways.

AH: This is also your first release on Holy Roar Records. How does it feel to be part of a label that has a great reputation for releasing stellar hardcore bands?
Justine: We’re really stoked, we’ve been a huge fan of Holy Roar bands for some years now and to be apart of it is a real achievement for us!

AH: How did you join up with Alex and Holy Roar?
Justine: Originally we sent Alex our stuff in 2012 when we were just a recording band. He asked us to keep in touch so we messaged him again a year or so later when we had a full line up and sent him our new EP and just went from there really!

AH: You’ve recently been playing shows alongside Bastions and Pariso. How have they been going?
Justine: They have been going great! We’re real big fans of both bands so it’s really great to be playing on the same bill as them, they’re all super nice guys as well.

Change Nothing, Regret Everything. by Employed To Serve

AH: What can fans expect from an Employed To Serve set? Complete chaos?
Justine: We like to make it ‘contained’ chaos ha. We love going nuts but are very conscious of playing our set properly so it doesn’t just sound like noise.

AH: Now the EP is out and the shows with Pariso are nearly done, what else do you have planned for the coming months?
Justine: We have our release show in London on 3rd April, we have our favourite bands playing that (Bastions, Svalbard and Rough Hands) and we also will be appearing at ‘Kin Hell Fest in Leeds on 4th May. On top of that we have a tour every month up until November where we go to the studio to record a full length album…. so we’re keeping busy!

AH: Finally why should Already Heard readers check out ‘Change Nothing, Regret Everything.’?
Justine: It’s only 12 minutes long and promises a healthy blend of misery mixed with influences of Botch, The Chariot and Code Orange Kids.

‘Change Nothing, Regret Everything’ by Employed To Serve is out now on Holy Roar Records.