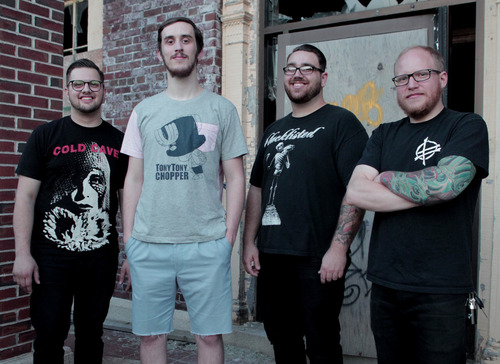 With the so called “emo revival” picking up momentum in recent months, a whole crop of guitar bands have been given the aforementioned tag and whether they like it or not Courtesy Drop are one of those bands.

The quartet’s latest full-length, ‘Songs to Drive To; Cry, And Make Love To,’ fits nicely in the mould of Sunny Day Real Estate, and Texas is the Reason with its aching lyricism and jangly guitars. Nevertheless ‘Songs to…’ is a compelling mix of 90’s influenced indie rock with a hint of post-rock (see the overwhelming five-part arrangement ‘The Quack Doctor’s Sakura Blossoms.’)

Before the turn of the year, Already Heard spoke to guitarist and vocalist Paul Chalos about Courtesy Drop’s influences, ‘Songs to…’, being labelled as an “emo” band and more.

Already Heard: Can you introduce yourself and your role in Courtesy Drop?

Paul Chalos: My name is Paul; I play guitar and sing.

AH: For new listeners, how would you describe your sound?

AH: I heard your influences consist of Jimmy Eat World, Foo Fighters, Bjork, Shai Hulud, and The Get Up Kids. Would you say your sound is a combination of those acts?

PC: Not really. For me, being “influenced” by another artist is a little deeper than just trying to write music that sounds similar; I consider these artists “influences” because of how they’ve affected my general perception and approach to music.

AH: Even though the ’emo’ tag has been thrown at you, you’ve also been described as a post-hardcore band. What would you consider to be or what do you prefer?

PC: I’ve grown to dislike both of those tags, and I don’t particularly like associating with either; their definitions have become so different from when I was younger, and I don’t really like either of the newer incarnations (haha). To be truthful, I just have a passionate hatred for genre boundaries, and I don’t like classifications to any degree.

If I absolutely had to have a preference, I’d just say “rock”, because that’s about as general as I can get.

AH: This past October you released your second LP, ‘Songs to Drive to; Cry, and Make Love To’. How would you sum up the overall tone of the record?

PC: The tone is pretty dark. There’s some melancholy mixed in, but for the most part it’s more depressed than anything; a lot of it came out of a rough time in my life, so that’ll happen.

Songs To Drive To; Cry, And Make Love To by Courtesy Drop

AH: Lyrically what inspired this record?

PC: A mixture of personal experiences and thoughts; it really can’t get much more specific than that without just explaining each song (haha).

AH: One of the most intriguing parts of ‘Songs To…’ is the five part instrumental section called ‘The Quack Doctor’s Sakura Blossoms’. Can you discuss how this idea came about and what your initial approach?

PC: This is actually my favorite part of the release, to be honest. It’s a five part instrumental piece based on specific emotions from my favorite story arc in an anime called One Piece (the sample in part V is taken from one of the final episodes of the arc). The idea came about two days before we were going in to record the album; I had been listening to Envy and Mono non-stop, and really wanted to write a long post-rock song, so I thought it’d be fun/cool to have one as a bonus track at the end of record. After writing it all, splitting it into five tracks made more sense, given the drastic shifts in tone and the importance (to me) of emphasizing each part.

AH: I’ve seen the album has been praise from a number of outlets. How has the overall feedback been?

PC: It’s been great, and really diverse, which I think is the best part. I’ve had metal-heads to crust-punks to hip hop fans tell me that they love the record, and that’s one of the coolest feelings.

PC: Maybe. Back then, I think more people knew how to keep things diverse in long records, whereas now, I can’t even get through some EP’s because they’re so repetitive and one-note.

AH: Do you think its now more of a challenge to keep a listeners attention for longer now as we’re used to records being 30 – 40 minutes?

PC: The challenge is with the writer, not the listener, in my opinion. If you bring enough good diversity to the table, they may not sit and listen to the entire thing every time they put your record on, but they’ll still like it all, and listen to it all in segments.

AH: I understand the band is based across two states; Tennessee and New York. How does this effect issues such as touring, writing and rehearsing?

PC: It’s not as big of a hindrance as it seems. We have all of the guitar gear here in TN, so the other two guys just drive down with the drums for tour (Joel’s car gets great gas mileage). I write most everything myself, so it’s not a huge issue; I just record parts on my phone and send it everyone to get reactions and ideas to expand on. When it came to practicing for recording, Hinkle and I just went up to Rochester for two weeks before hand. It’s actually kind of cool to have that trip as part of the band dynamic, I think; at least for now.

AH: Going back to being linked with the ’emo’ tag, what do you make of the so-called “emo revival” that is being touted amongst various publications?

PC: I think it’s a short lived media trend. Some of the bands that have been associated with the “emo revival” are already burnt out and almost dead, so I don’t really give it much thought.

AH: As we’re heading to the end of 2013. What have been your favourite releases from the past year and what are you looking forward to in 2014?

CH: Some of my favorites were: The Dillinger Escape Plan’s ‘One of Us is the Killer,’ The Appleseed Cast’s ‘Illumination Ritual,’ Enemies’ ‘Embark, Embrace,’ Shai Hulud’s ‘Reach Beyond The Sun,’ Better Off’s ‘(I Think) I’m Leaving,’ Cove’s ‘Pig God EP’ and Tancred’s self-titled.

AH: Any final words you’d like to say to close this interview?

CH: Be excellent to each other, and party on, dudes!

‘Songs to Drive To; Cry, And Make Love To,’ by Courtesy Drop is available now on Animal Style Records.