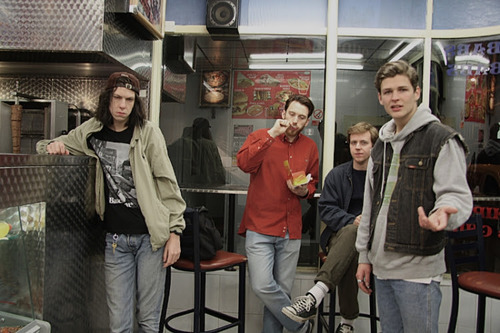 Bloody Knees are the latest band to emerge from the UK lo-fi punk scene following the likes of Nai Harvest and playlounge. On August 25th the quartet release their new EP, ‘Stitches’ which promises to be a catchy and raw in equal measures. The recently released title track and lead off single ‘Daydream’ suggests ‘Stitches’ will be a combination of sludgy garage-punk, lo-fi guitars and somber lyrics yet delivered in bitter, energetic tone.

The EP release will be preceded by an appearance at the Reading and Leeds Festival this weekend, but before then we spoke to vocalist Bradley Griffiths. The singer discussed the new EP, joining Dog Knights Productions, being part of the UK emo and lo-fi resurgence and more.

AH: Let’s kick off with an easy one. What’s the backstory behind Bloody Knees formation?
Bradley: Bloody Knees started as a one man project in my university house in Southsea where I was just writing songs and recording them into my laptop and programming shitty drums and stuff. I came home from uni for a bit and saw all the boys (Sam, Chris and Tom) and everyone seemed dead keen on making it a ‘real band’. We booked a practice room, learned the songs, then played Southsea Fest as our first show that September.

AH: Later this month you’re releasing an EP called ‘Stitches’. What can new listeners expect from the EP in terms of sound/style?
Bradley: New listeners can expect some fun, melodic, aggressive grunge/garage punk. New listeners should also definitely make the effort to come and see us at a show because that’s where it’s most fun.

AH: As a preview, you recently posted a track called ‘Daydream’ online. Does the track give a clear indication of what peopl can expect from the EP?
Bradley: This EP has a little more of a diverse track listing from the first. Some faster, some slower. But ‘Daydream’ definitely gives a good feel for the overall theme and sound of the record.

AH: How has the response been to the track?
Bradley:
The response has been great so far! We’ve had a load more ‘likes’ and stuff and at the last shows we’ve played people knew the words so that’s pretty good! We’ve also had a decent amount of pre-orders for the record off the back of that one song so it’s nice to know people are backing it.

AH: The EP is being released through Dog Knights Productions, a label that has released a load of quality independent releases in recent months. What drew you to working with them?
Bradley: Dog Knights Productions is an amazing independent record label. I’ve been buying records from DK for a while and when Darren (label owner) got in touch with, us after the Nai Harvest lads put us forward, we got talking about it and everything fell into place. Darren is wicked, he puts a shit load of time and effort into the bands and records he releases through Dog Knights so it’s a pleasure to be releasing our EP with him.

AH: You seem to have been grouped within the current UK emo and lo-fi resurgence. What do you make of the “resurgence”? Is it something you endorse?
Bradley: I’m all for it. I’m just happy that the sort of bands that I like listening to have been getting more attention over the last couple of years.

AH: Are there any bands from that scene we should be listening to?
Bradley: Yeah loads. Not all strictly ‘Emo’ or ‘Lo-fi’ but there is a decent scene at the moment consisting of a bunch of bands that are all great mates and love partying/playing shows together. Birdskulls, Nai Harvest, The Magic Gang, Tilapia, Walleater, Headroom, Playlounge, Abattoir Blues, The Sinking Feeling.

AH: The EP is preceded with some UK shows with Cerebral Ballzy. What is a typical Bloody Knees show like?
Bradley: There’s always a ton of energy at a BK show. I pull a different muscle every night I swear. It’s loud and we like to encourage everyone to have as good a time as possible. Crowd surfing and stage dives are most welcome.

AH: Finally why should Already Heard readers go and listen to ‘Stitches’ on August 25th?
Bradley: Because it rules and I genuinely believe they’ll all like it. It’s fun and everyone should learn all the words and come and party with us at a show. We’re all mega proud of this record!