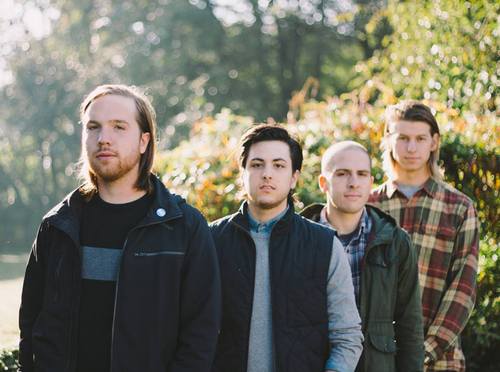 Hailing from the city known as “Music City”, Nashville, Tennessee’s rock quartet Better Off have produced a stirring collection of songs with their debut record ’(I Think) I’m Leaving’. With a sound that blends pop sensibilities with emo-rock tone, ’…Leaving’ has seen the band been likened to Brand New, Balance & Composure and Jimmy Eat World.

It’s certain to say that if you’re a fan of the aforementioned bands, you will instantly find a connection in Better Off’s introspective lyrics as tracks like ‘Sick, Sad, Sons’, ‘A Fool Walks Into a Bar and Cries Wolf’ and ‘Keeping Watch show. With energy and passion, Better Off are one of the brightest Stateside hopefuls we’ve come across in quite some time.

Already Heard: Hi. Can you tell us who you are and what your role in Better Off is?
Luke:
Hi. My name is Luke Granered and I sing/play guitar for Better Off.

AH: To begin with you’ve been described as a throwback to the late ’90s-early 2000s indie/emo scene. What are your thoughts on this?
Luke:
I take it as a compliment. We all listen to that, so it makes sense!

AH: For new listeners, would you say that the late ’90s-early 2000s indie/emo description is accurate in terms of your sound?
Luke:
I’d say so. We lean more towards pop /rock than most of those bands. But that sound is there.

AH: Three bands I see you’ve been compared to are Jimmy Eat World, Balance & Composure and Brand New. How does it feel to have that comparison? Do you consider them as influences?
Luke:
It feels great!!! Jimmy Eat World and Brand New are two of my favorite bands. I like Balance a lot too, but I haven’t grown up with them like the other two. Those bands mean a lot to me.

AH: ’(I Think) I’m Leaving’ was released earlier this year and is your debut record. When you were writing and recording the album, what was your initial aim?
Luke:
Our initial aim was to track a record we enjoyed and get it out as soon as we could. We had been touring on a 4 song EP with the intention of changing our name once a full length was ready, and that had drawn out for quite a while. We were ready to play something a little more serious.

AH: Do you think succeeded in achieveing that aim?
Luke:
Definitely! I have a strong emotional connection with the record, so I love playing those songs.

AH: From having the record on repeat for several weeks, it comes across a deeply personal record. Can you tell about what influenced the writing on this record?
Luke: Absolutely. Without getting into too many personal details, I’ll say that it is mostly about addiction, and the effects of a parents relationship on their child.

AH: The record has been out for a few months now, what has been the response been like?
Luke:
Its been great! Our friends have been incredibly supportive and we’ve made new friends along the way. I hope we keep that up!

AH: Can you tell us about the artwork and how it relates to the record?
Luke: The artwork is a picture taken by a childhood friend of mine named Hayden Myrick. In middle school and high school, my friends and I would all hang out at our friend Murphy’s house on the weekends. I have a lot of memories there, and the cover is from a room in that house. The record is about the truth of my childhood coming to light, and that picture is a beautiful symbol of my younger self.

(I Think) I’m Leaving by Better Off

AH: You’re from Nashville which is known as “Music City”. Does the nickname back up the current music scene in Nashville?
Luke: Heck yeah it does. Nashville has so many great bands.

AH: Last month you headed out on a short US tour and you’re in the middle of a Canadian run. How have the shows been like especially since the release of ’(I Think) I’m Leaving’?

Luke: So cool. Its been unreal seeing people knowing the words here and there. Thats the most notable change, to me. I love that.

AH: Is just touring continulously on the agenda right now or is there a follow up to ’…Leaving’ in the works?
Luke: I’ve been writing songs a little bit, but we haven’t gotten together as a band to work on them yet. The record was written close to 2 years ago, so I’m excited to start a new record. But for now, tour tour tour.

AH: Any closing words for this interview?
Luke:
Get a dog. Ride your bike. Watch It’s Always Sunny In Philadelphia. Thanks for the questions!

’(I Think) I’m Leaving’ by Better Off is available now on 6131 Records and Blood & Ink Records.