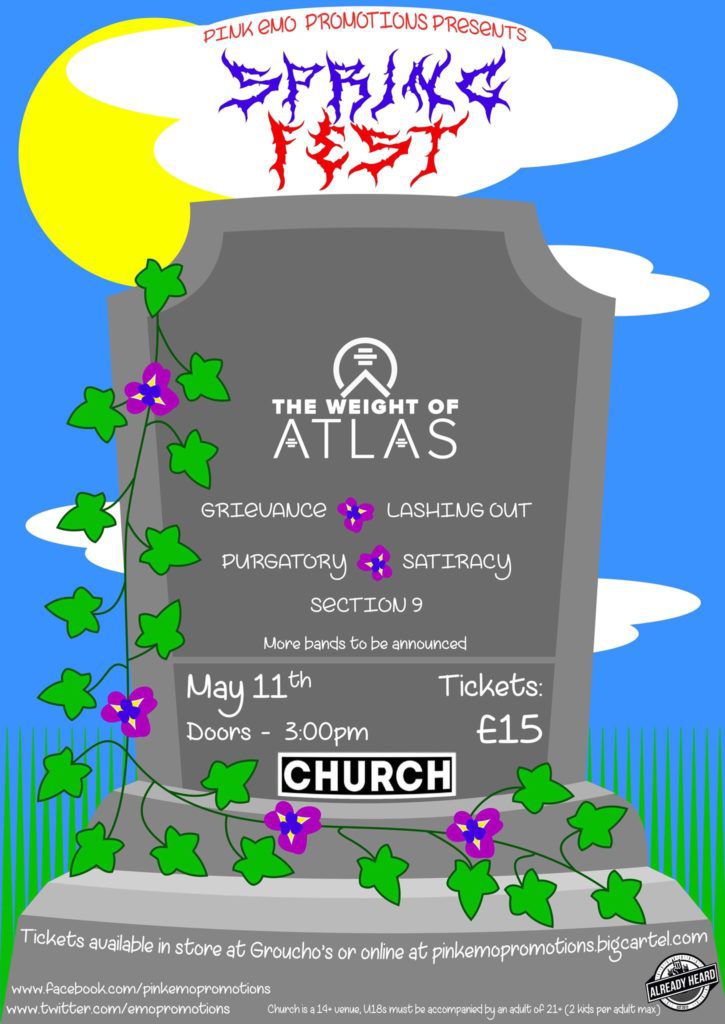 Already Heard in association with Pink Emo Promotions is excited to present SpringFest 2019, an all-new all-day event taking place on the 11th May at Dundee’s revered Church venue.

Like a herd of newborn lambs, SpringFest is a gathering of fresh blood from Scotland’s metal scene who grace Church’s stage fresh from the slaughterhouse with a thirst for chaos. So we’d better see you up front.

Confirmed already for SpringFest are Dundonian quintet The Weight of Atlas, who make their long-awaited return to the stage after the release of latest single ‘V’. Since their 2011 formation, TWOA have specialised in merging pummelling metalcore with pulsing electronic backdrops and stratospheric choruses packed with catchy hooks. It’s a bewildering mix on paper, but we guarantee the likes ‘Strangers’ and ‘The Art of Letting Go’ are going to incite pits and sing-alongs in equal measure.

Fellow Dundonian troop Grievance are poised for a full scale jugular assault at SpringFest. Following a series of lineup changes, the quintet return refreshed and re-energised to destroy the city once more. With an arsenal of hits up their sleeve including ‘Torment’ and ‘Vultures’, Grievance fuse the gritty blast beat-laden deathcore of Thy Art is Murder with desolate neo-gothic melodies which anyone who has ever spent gloomy nights listening to Cradle of Filth will immediately connect with. Absolutely not to be missed.

Granite City demolition crew Lashing Out bring their infamously violent brand of beatdown-infused deathcore to Church with hammering riffs guaranteed to crack punters heads in like rotting eggs. Like a disease, Lashing Out have spread across the UK’s underground slam metal scene, performing across the country with the likes of Street Soldier, Spawn of Disgust and Capital Punishment. One listen to debut single ‘Fight Club’ is enough proof that this set is gonna be a nasty one. Only the strong will survive.

Fellow Aberdonians Purgatory’s cathartic post-hardcore has gone from strength-to-strength in the space of one year with the release of two EPs ‘Foundations’ and ‘Martyr’. Since creating initial buzz with debut single ‘Darkest Hour’, Purgatory have become mainstays in the ‘Deen headlining across the city and supporting the likes of Holding Absence, Sharkteeth Grinder and Dude Trips. Packing frantic energy to tracks like ‘Sinner’ and ‘Martyr’s’ title track, this is a band unafraid to expose their raw emotion to mass crowds. And you shouldn’t be afraid to experience it up close.

Satiracy may have played their first ever show at Glasgow’s Ivory Blacks, but their roots come from the City of Discovery, and Dundee have discovered the force of their genre-defying extreme metal on many occasions. The group’s 2017 debut ‘Chapters of Pestilence: Lost City’ remains a cult classic of the Scottish metal circuit, seamlessly fusing the members’ shared love of challenging technical musicianship on ‘Penance’ and ‘Lost City’ with the finest cuts of melodic death metal which shines through choruses to ‘Unearth’ and ‘Son of a Veteran’. Alongside the immersive prog-metal of ‘Ruins’ and ‘Skin Alive’, Satiracy’s full package is gonna detonate Church, so don’t miss out.

Inverness death metal crew Section 9 may be the youngest lamb to join the flock, but their sound is a groove-laden throwback to some of the finest shapers of the genre, with rushes of old Cannibal Corpse and Sepultura fuelling their dense bludgeoning. Debut track ‘Silent Annihilation’ may only exist as a demo at the moment, but it’s a track with ‘circle pit’ written all over it, as high paced shredding and screeching death growls give this song a rapid pulse before it bleeds out slowly through churning breakdowns to a close. Is it reinventing the wheel for death metal? Maybe not, but it’s what the genre is all about at heart. Come see for yourself.

SpringFest 2019 will take place on the 11th May at Church Dundee. Tickets available at Pink Emo Promotions’ Big Cartel Page.