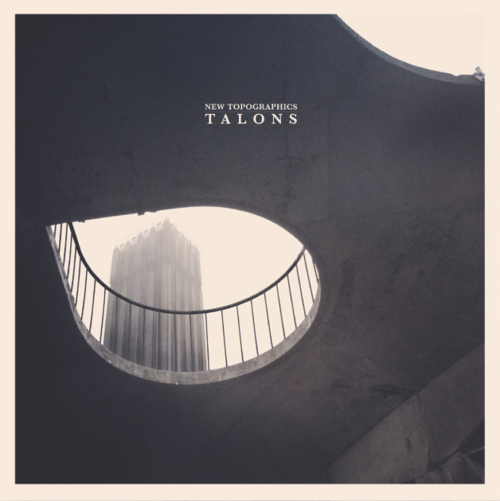 It wouldn’t be too bold a statement to assert that the quality British post-rock is currently at is an all-time high. To mention only a few names of the current vanguard fortifies that claim; we have bands like Three Trapped Tigers, And So I Watch You From Afar, Maybeshewill, and Brontide making forays into a wider consciousness with their wonderful experimental sounds (not forgetting stalwarts such as 65daysofstatic and Mogwai), and joining such esteemed company with their first album in four years are the much-missed Talons, returning with the utterly stunning ‘New Topographics’. The Herefordshire sextet have found life getting in the way of making music during their aforementioned hiatus; is ‘New Topographics’ the album that sees them reclaim their place amongst the crème de la crème? Spoiler alert: the answer is an utterly resounding yes.

2010’s ‘Hollow Realm’ was a fantastic record in its own right but played it a little safe, sticking to familiar post-rock tropes more rigidly than this; ‘New Topographics’ has more in common with Deafheaven’s Sunbather than, say, Explosions In The Sky, foregoing the density of black metal riffage but retaining the malevolent, foreboding atmospherics. In the absence of vocals, Talons’ two violinists, Reuben Brunt and Sam Little, are the stars of the show, their screeching strings bringing a feel of post-rock demigods Godspeed You! Black Emperor to album opener ‘Monuments’. Whereas on ‘Hollow Realm’ things were done at a canter, this track, over eight minutes in length, shows from the off that they can sound just as incredible when not hurtling towards the finishing line; all it took to show their true strength is a change of pace.

While ostensibly an interlude track, ‘Reverie’ is an utterly gorgeous, as the violins swell and rise amongst an ocean of feedback; the ideal soundtrack to a beautiful sunrise. ‘Lunar Gloss’ takes the band to yet more unexpected territories, with an industrial-esque brutish air powered on by Sam MacDougall’s excellent drumming; a bruising number with a wailing guitar coda that will raise the hairs from your arm. ‘The Wild Places’ sees a return to the unrelenting pace of the debut record, building into a dramatic payload that should see your chin move towards your sternum. However, the real zenith of the record comes in the form of harrowing masterpiece ‘The Dreams Have No Dream’; from the point about four minutes in when a coruscating riff comes in, the closing moments of this track are pure adrenaline-inducing, exhilirating bliss – listen to this one with the volume turned up to the hilt and ensure you’re wearing sturdy shoes, else you might find your socks being blown clean away.

If ‘Reverie’ was an interlude track to instil great beauty in one’s mind, then ‘Stay Cold’ is its polar opposite, as the penultimate song on the record is funereal and morose in nature. This sets up the opening moments of ‘Petrovice’ perfectly as sorrowful violins open the curtain closer, and as the other instruments come into play, it quickly becomes clear that this album’s not quite done with you yet; the “epic closer” might be the most predictable post-rock move of all, but my gosh does this one sound truly spectacular. The last four minutes of the song are utterly euphoric, soaring violins giving way to a stunning climax that signs off ‘New Topographics’ in the most suitably dramatic of fashions. The score you will see at the bottom of this page is a bolder statement than yours truly made at the start of this review; a perfect score is not a trifling matter, but on only their second record (compilation of early work ‘Commemorations’ doesn’t really count), Talons have made a defining statement here that catapults them to the very forefront of a disparate scene that figures amongst the very best music this land has to offer. If you don’t go now and listen to this album, there is something pathologically wrong with you.

‘New Topographics’ by Talons is out now on Big Scary Monsters Recordings.