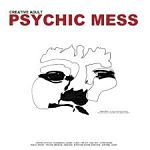 Creative Adult come from a rich and diverse scene of punk rock from Northern California and its definitely not hard to see the influence of it on their newest album for Run for Cover, ‘Psychic Mess’. Their punchy punk rock will definitely appeal to fans of other Bay area export, Ceremony’s recent effort ‘Zoo’. The whole thing has a real live recording feel to it, as though the whole thing has been recorded on the fly in a series of single takes, and that gives it a lot of energy that feels genuine and raw.

There’s a punk attitude on display; that love of, and influence, from 70s and 80s punk is found throughout the record. There’s the simplicity to a lot of melodies and rhythms in tracks like ‘Far Out’ – it’s the sort of energy that bands like the Stooges or the Ramones built their career on. This is married to the more avant-leaning rock of bands like Sonic Youth, Joy Division or Gang of Four in the freak outs and flourishes of guitar on‘Psychic Message’ or ‘Public Transit’. It’s something that seems like those would have two fairly opposing sets of principles, but it works. ‘Psychic Message’ starts off sounding like an initial attempt at the ‘Doctor Who’ Theme tune, and ends up somewhere in a cave with Joy Division in terms of the sound. The guitars become over saturating and it’s almost too much to explain. Meanwhile ‘Far Out’, when it gets going barrels along like a juggernaut, with the pace that you could see punks in stereotypical clothing yelling “oi oi oi” along to, whilst pogo-ing; its visceral and simple and it just nails you. There’s also some brilliant bass work on display like ‘Flash’ – where a chunky rubato bassline pulls you along through this ride, where guitars buzz away high above and the part Iggy Pop drawl, part Thurston Moore ramble of vocals that are largely unintelligible as the drums have a tantrum all to themselves. It’s joyously chaotic and totally loveable.

If there is one thing that bothers me, it feels like there’s actually not a lot of focus, and tracks sometimes seem to meander in and out of existence without much lasting recognition. It leaves things feeling a bit less memorable than they should. The ending for ‘Psychic Message’ disappears into the aether, but it feels more like copping out than actually ending, which is frustrating when I feel like there’s a lot of promise. Overall, there are some good tracks here, with ‘Flash’, ‘Control My Eyes’ and single ‘Deep End’ providing high points, but also some fairly underwhelming tracks. I don’t know what I expected; not 3 minute 3-chord pop! I do however feel that my interest has been piqued, and while I’ve been frustrated by some of it, it has been more worth my time. Creative Adult seem to exude an effortless confidence that convinces you to go with them on this journey, and if you don’t like it, screw you. They’ll do what they want, mate.

‘Psychic Mess’ is released on 24th February through Run For Cover Records.