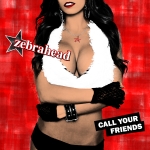 Let’s be honest, pop-punk has long gone it’s 1990’s heyday, but old skool American rockers Zebrahead are back with their tenth studio release ‘Call Your Friends’ – a record certain to touch the hearts of those who refuse to let go of their youth. The group have been together for over a staggering 17 years but it’s quite simple, these guys have still got it!

The album certainly feels like a blast from the past, providing simple and fun pop-punk tunes. It will bring you back to those days of rocking out to bands such as Blink-182, Sum 41 and Bowling For Soup. ‘Call Your Friends’ is nothing new, we’ve heard it all before – but Zebrahead have made a firm mark to say this is them, and they’re certainly not growing up or changing their style to fit the mainstream.

Fans of Zebrahead will absolutely adore this latest release, keeping in with their famous fun-filled punk rock sound, yet they have branched out and created heavier rock hits too. The album is bursting with tracks to get those tootsies waggling.

The top classic pop-punk tracks are ‘With Friends Like These Who Needs Herpes?’ and ‘I’m Just Here For The Free Beer’ which include the classic racing melody, punchy juvenile lyrics and electrifying rocky riffs. The songs predictably include lyrics such as “I don’t give a fuck what you think about me”. Zebrahead use typical pop-punk youthful words conveying the meaning of mischief, and choosing to not conform to society and sticking it to ‘the man’.

The other recommended hits are ‘Born To Lose’, ‘Automatic’ and ‘Don’t Believe The Hype’ for the catchy lyrics and punchy sing-along choruses.

The entire record is an entertaining light hearted musical melody which covers the usual male camaraderie bases of beers, parties, and if the cover artwork is anything to go by – girls with big knockers. Obviously the record is musically excellent, and cleverly infuses pop-punk with rap-rock and throws in some metal for good measure. However you wouldn’t give it another listen after the first play, it’s just good for a humorous listen and to reminisce over those good old days.

‘Call Your Friends’ by Zebrahead is available now on Rude Records.