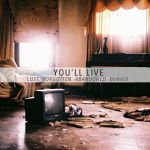 Hailing all the way from South Florida, You’ll Live has concocted a new four track EP of screamo/post-punk goodness. These four tracks encompass a reflective tale wrapped in a shroud of downtrodden and mordant music which is both harsh and light.

Musically the band utilise 90s-influenced screamo with a progressive indie/post-punk styling that swirls itself through the motions. To go into detail, there’s angst filled yells that contrast smoothly with plucked sorrow-filled notes which borderline on ambiance and dances with bass and drums. This follows a steady flow on ‘Lost’ but the tempo picks up on the likes of ‘Forgotten’ before dropping into a steady flux which picks itself up once more towards the end. After the screams have ceased a third of the way through last track ‘Buried’, there is an instrumental bow out which shows the music being the centrepiece of the bands sombre yet bright output.

What is it the vocalist is yelling about? Well, the angst reflects the stages in coming terms with the end of a bitter relationship. The song names identify these four stages to the letter; themes and emotions of self-doubt, loneliness, bitterness and the like spring out with contempt and acceptance.

This second EP from You’ll Live is a very well-crafted piece of music that revels in the emotions found in a post relationship situation. Angst-filled screams reflect the rough-edged, murky nature in the feeling and min set of the individual. All the while, dancing around the vocals are the ambient-esque melodies and beating punk heart of the band’s enticing music. You’ll Live is a fine example of a band utilising a dischordant mindset in a genre such as this.