Album Review: You Had Me at Hello – Spirals 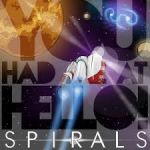 The conventional wisdom is that live is where it matters for bands. If you can bring it on stage then poor production and a lack of technique won’t matter because live is where it matters. It’s where you build your audience, its where your conviction truly shines and people can really fall in love with your music. For the sake of You Had Me At Hello, I really hope the conventional wisdom holds true because if they’re hoping to sell themselves off ‘Spirals’, it’s going to be a tough sell.

You Had Me At Hello are remarkable in that they’re totally unremarkable. There’s nothing here that gives the band a sense of identity or that would help me to recognise them without the help of the title on a Soundcloud embed. There’s swathes of pop punk, the occasional streak of surly alt rock and suitably vague emotive lyrics and anguished melodies. There’s nothing wrong with any of those ingredients, but their presentation on ‘Spirals’ is far from inspiring.

There’s nothing particularly bad about this album, in fact its remarkably consistent throughout.  All the tracks here are as good as each other, the problem is that none of them are that strong, except for ‘Planets’. Every track here is stronger than pointless exercise in moody ambience. When the band pick up the pace a bit such as on ‘Tonight You Lost’ and ‘Build The Rest of Me’, they sound a bit more convincing, but they never deliver enough bite or muscle to suggest that they have what it takes to these songs to bigger stages.

This record doesn’t sound particularly powerful, the guitars and vocals are much better than the rhythm section in the mix which robs the music of a sense of momentum that the band could benefit from. There’s no  point in being upbeat if that beat isn’t obvious to your listeners. The odd thing about the record is that it does get slightly better as it goes on. Saving the best for last is a poor tactic when it comes to trying to attract new fans.

If the tracks from ‘Spirals’ sound good live then maybe You Had At Me Hello do have some future as openers for bigger bands pedalling the same blend of modern alt rock and pop punk, and maybe if they learn from those bands and throw a bit more money at their next recording they could become something. This is only a debut release after all.

But if they continue to put out tracks like ‘Yes You Are’, they’re more likely to leave audiences wincing in front of their stereos instead of smiling with anticipation in the ticket queue.

‘Spirals’ by You Had Me at Hello is out now.

You Had Me at Hello links: Website|Facebook|Twitter