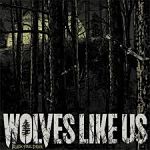 Adding themselves to the every growing list of polished heavy rock bands from the colder, northern expanses of Europe, Wolves Like Us now have a follow up to their acclaimed 2011 album ‘Late Love’ in the form of upcoming album ‘Black Soul Choir’.

It’s loud, rhythmic and sonically expansive. Combining both short, punchy tracks such as album opener ‘Days of Ignorance’, which clocks in at a frantic, noisy 1 minute 25 seconds, with long and heavy ambient tracks like ‘Thanatos Wins Again’ that pull the pace back at 7+ minutes, the album is decidedly varied, with acoustic guitars even making an entrance for the vocally drawled, low paced track ‘Lovescared’.

That track withstanding, the rest of the album is a heavy affair, with thick growling guitars pushing tracks underneath a slow, double tracked vocal line that comes from the throat and fills the tracks out. The drums are tight and snappy, particularly in the up-tempo ‘We Were Blood’ which is a standout track on the album for me.

This album is definitely one for fans of Kvelertak and Mastodon alike, and the mix of long and short tracks with varying paces is a great combination to stop things from getting old. The vocals can feel a little repetitive at times, but top notch production distracts you from this, as you’d expect from from famed Norwegian producer Mike Hartung whose client list goes all the way from A-Ha to Satyricon!

‘Black Soul Choir’ by Wolves Like Us is released on 4th March on Prosthetic Records.