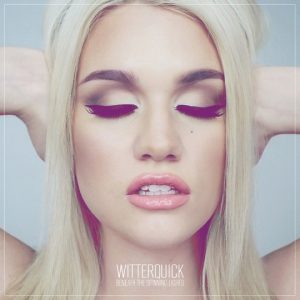 There’s few places in the UK that can match the south-west for emerging talent at the moment, and Exeter’s Witterquick are yet another up-and-coming act aiming to grab your attention.

They’ve made a solid fist of it so far, too. Newly signed to LAB Records and with a high-profile tour with Nothing But Thieves already under their belts, they’re making friends in all the right places. And, on debut EP ‘Beneath The Spinning Lights’, the quintet have delivered a steely and assured marker that points to a bright future.

Similarities to melodic Britrock heroes Lonely The Brave, Fatherson and Twin Atlantic abound, but there’s clearly a sense of self behind cuts such as ‘The Road’ that ensures ‘Beneath The Spinning Lights’ has an identifiable voice. One of the main reasons for this is vocalist Will Alford’s delivery, which is consistently excellent and impassioned. The true beauty though is that he never over-sings, despite possessing a voice that could (and will) bother the airwaves. Instead, he lets the lyrics carry the emotional weight of the song, especially on the gorgeous ‘Wayward Signs’. It’s confident, strident stuff.

That said, for all the lovely vocals, ‘Beneath The Spinning Lights’ does feel a touch safe musically. It’s forensically played, superbly arranged and wonderfully executed, but lacks enough drama or tension to elevate the tracks on offer to truly spectacular heights. ‘Rise’, for example, is a downbeat epic that never really reaches the heights it’s aiming for despite the building crescendo.

Yet at five songs long, ‘Beneath The Spinning Lights’ is an enjoyable introduction to Witterquick’s many charms, and is sure to lead to a level of expectation ahead of a debut full-length. With no guarantees in life, Witterquick are as good as a safe bet as future breakout stars.

’Beneath The Spinning Lights’ by Witterquick is out now on LAB Records.