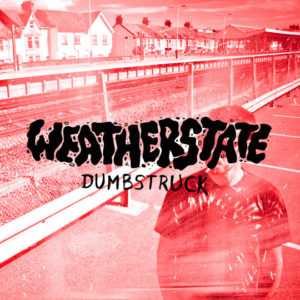 As 2016 slowly trickles into the forefront of our lives, so does the heated and massively crowded list of new and exciting bands looking to make their own firm and lasting imprint on the year. With so many groups craving your attention, it’s difficult to know how to split the brilliant from the bollocks. When bands are as good as Weatherstate, though, that conundrum is made an awful lot easier. Following up 14’s ‘Dead Ends’ the Bristol boys are back with a new 5-track injection of nostalgic pop punk to get you out of the January rut you have let yourself get in.

One of the things that really grabs hold of you about Weatherstate is how utterly jovial they sound in the face of adversity. Like a smile through crooked teeth, each song on ‘Dumbstruck’ is chock full of good time vibes, summery visuals and relatable positivity that cannot help but get lodged deep in your subconscious.

Opener ‘Stutter’ channels a young Green Day with fast-paced drums and gruff vocals before ‘ILL’ bounds about with reckless abandon and alt-rock edging riffs. ‘Stuck In A Hole’ sets itself out as a clear highlight which screams sunshine and smiles, while ‘Piss It All Away’ gives off hints of grunge while flowing with a mouth full of spit and swagger in its step. Closing with the breezy carefreeness of ‘Grinding My Teeth’, ‘Dumbstruck’ plays itself out as the sort of pick-me-up that will have even the most stubborn of heads nodding.

All in all, ‘Dumbstruck’ is a sharp, snotty glimpse into the minds of a band brimming with wide-grinned indifference and youthful vigour. With one foot firmly rooted in pop-punk and another dipping its toes into the past, Weatherstate are a minty fresh gust of air into a scene that was quickly running out of new ideas.

Dumbstruck by Weatherstate is released 22nd January through Failure By Design Records.