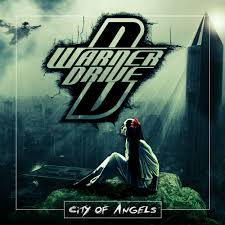 Released out of El Hefe’s label Cyber Tracks (NOFX, guitarist), LA rockers Warner Drive have churned out ten, solo-fuelled, sleazy rock n roll jams in the form of their new album, ‘City Of Angels’. While mostly maintaining a hard rock sound, Warner Drive tends to lean towards punk in the form of Alkaline Trio and The Distillers, among other bands. Nonetheless, their well-produced songs accompanied by their overall catchiness, has proved ‘City of Angels’ to be a fairly enjoyable listen.

Perhaps one of the greatest strengths that Warner Drive possesses is their straight-up radio-friendly tone. “How is that an asset?” you die-hard punks may be asking. Well, there is nothing wrong with a commercial sound provided it’s done well, and Warner Drive certainly deliver. Songs like ‘King of Swing’ and ‘West Memphis Three’ consists of many memorable riffs and solos, however, it’s the opening track ‘Rising From The Fallen’, in which the band really shows off their promise as a future arena rock band. Consisting of an underlying synth, the track slowly builds before launching into an anthemic combination of solos and chorus, which is sure to be a live staple for future shows.

Nevertheless, this sound does tend to wear thin. With each song crammed with solo upon similar solo, the album fails to produce enough variety to keep the listener entertained for the whole duration. Yet, the main problem of ‘City of Angels’ is that its lyrics are just overflowing with cheesiness. Considering its radio friendly music, it’s not like I’m expecting literary genius, yet Warner Drive could have definitely made a worthwhile effort. Examples such a ‘Boys N’ Girls’ and ‘A-Ha’ tell the tale of romance, and while that’s perfectly fine, the bland lyricism such as “Boy meets girl and girl changes his world”, makes the songs seem shallow and downright corny. Of course, not everyone is that affected by lyrics, however as the seemingly endless chorus of ‘A-Ha’ wearily plods on, you can’t help but feel like you’re wasting your time.

On the whole however, ‘City Of Angels’ is an enjoyable listen. Chock-full of radio-rock hits, Warner Drive offers a batch of easy-listening, solo-heavy tunes that could easily ignite a sing-along whether you’re listening in your car or attending one of their live shows. It’s just a shame that the majority of the album is so one-dimensional, as it seems Warner Drive have nothing more to offer than some catchy songs.

‘City of Angels’ by Warner Drive is out now on Cyber Tracks.