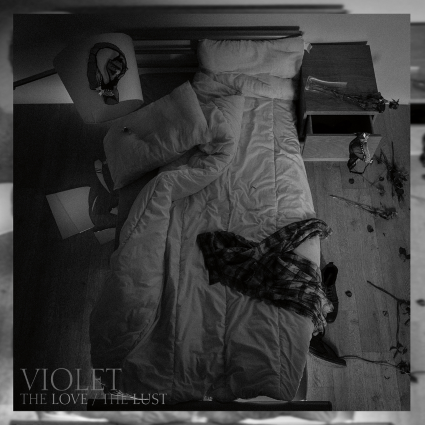 First there was crabcore, which is worth remembering if only to bring this wonderful Attack Attack! video back into consciousness. Then there was the crunkcore of brokeNCYDE, lest we forget their rampant misogyny. Then came Risecore with its monotonous array of super-polished chunky-riffed shouty men. Finally we arrive at metalcore’s latest ridiculous fad – crooncore. Brought about by the (genuinely quite fun, I should point out) Issues, the worlds of mainstream R&B and breakdowns have become one, and following in their footsteps are sextet Violet. However, Issues are not the only place from which the Derbeians draw influence; they are clearly fond of the musical ventures of the infamous Jonny Craig, whether that be as a member of Dance Gavin Dance or Emarosa. So, does this confluence of styles make for an enjoyable listening experience? Unsurprisingly, the answer in short is an unequivocal “no”.

The great thing about Dance Gavin Dance is that they were unpredictable; you never knew when they were going to head into an off-kilter riff that sounded like all their instruments were having an argument. At the other end of the scale, Violet’s ‘The Love/The Lust’ is extremely predictable, the eleven tracks here melding into an homogenous glob of awkward sound-clash, each track becoming more indistinguishable from another towards the end. Violet have evidently used their seven years together to become a taut unit, displayed on tracks such as ‘Daydreamer’, but with identikit song structures throughout, it becomes trying on the patience to get through this record the whole way through. Singer Jordan Samuel possesses a decent set of lungs, but Jonny Craig he ain’t; Samuel whinnies and wails where Craig would soar and soothe in otherworldly fashion, such as on Emarosa’s ‘Relativity’. The contrast between Samuel’s tones and screamer Charlie Bass’ throaty yell works well on occasion, but it’s nothing we haven’t seen before, and it’s quite clear from this record who Violet see as potentially earning them bill-topping status.

Whereas contemporaries like Issues can win you over with the charm found in their sheer over-the-top ridiculousness, Violet sound so generic in comparison; quite impressively for a fad still in its infancy, they’ve already sapped all the fun out of it. It was inevitable that Issues’ runaway success would spawn a bandwagon of copyists, but to create something so joyless when the clichés haven’t become tired tropes yet strikes one as flogging a live horse; you’re just being cruel to the poor thing. The closest ‘The Love/The Lust’ comes to flaunting with experimentation is a bit of glockenspiel and some female vocals on opener ‘Expectations. Reality’. Way to push the boat out lads, but maybe for next time, a nice little dubstep breakdown would push this record out of the doldrums it occupies.

It’s certainly unusual to find a band that have taken 7 years to put out their debut (or so the press around the record would have you believe – 2010’s ‘Eleven Eleven’ says differently), which suggests that Violet have experienced some false starts; unfortunately, ‘The Love/The Lust’ is another one of them. Flat, overproduced and disinteresting, on this evidence Derby doesn’t show signs of supplanting the metallic prowess of near-neighbours Sheffield, and this offering sullies the fine name of crooncore, a genre name I literally just made up. Also, putting girl’s underwear on your album cover for the titillation of teenage boys? Not a good hand to play, gentlemen. Poor show all round.

‘The Love/The Lust’ by Violet is out now on Small Town Records.