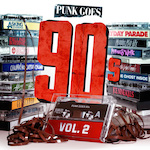 Love them or hate them, Fearless Records’ ‘Punk Goes…’ compilation series is always bound to get plenty of interest. The fourteenth installment of the series sees the label taking on a 90s theme for a second time.

As always a range of bands from the Vans Warped Tour scene are on here; even if they’re not “punk”. Nevertheless Asking Alexandria, Memphis May Fire, and Chunk! No, Captain Chunk! are on hand to give us beefed up versions of tracks by Stone Temple Pilots (‘Interstate Love Song’), Nine Inch Nails (‘Closer’) and Smash Mouth (‘All Star’) respectively. All of which are passable.

Quite often with the ‘Punk Goes…’ albums, you find hidden gems such as Get Scared’s cover of the Lit classic ‘My Own Worst Enemy’. Sure it’s not far removed from the original, but it’s just as fun and energetic and is the perfect opener. Whilst Motionless In White have challenged themselves with a cover of Rammstein’s ‘Du Hast’. However, the Goth metalcore act feel at home and amplifies the original.

The Color Morale’s version of ‘Everlong’ (Foo Fighters) is one of the most surprising tracks on here. Starting off with an acoustic guitar and atmospheric vocals, it then bursts through with vibrancy in the chorus as vocalist Garret Rapp makes the track his own.

When the track listing for this was released, one track I was looking forward to hearing was Yellowcard’s cover of ‘Today’ (by Smashing Pumpkins). However my high expectations aren’t met as the finish product comes off as rather weak as there isn’t much difference between this and the original.

Australia’s Hands Like Houses decide to pay tribute to fellow Aussie Natalie Imbruglia with a cover of her Worldwide hit ‘Torn’. Trenton Woodley’s warming vocals and the band’s post-hardcore/alt-rock style is a neat combination, and pulls off an appreciative take.

The penultimate track is one that many have been waiting to hear. Ronnie Radke’s Falling In Reverse take on the classic Coolio rap number ‘Gangster’s Paradise’. On paper it sticks out like a sore thumb and as you might of expected (or hoped), it is a complete mess. Radke’s awful rapping, along with the misplaced and unneeded breakdown, makes this a disaster. But on the brightside, you have to admit it’s a ballsy move from Radke and company to take on such a track.

A cover of Green Day’s ‘Good Riddance (Time Of Your Life)’ by Ice Nine Kills ends the album on a limp. Their upbeat take on one of the most covered Green Day songs is good but not extraordinary.

By no means is ‘Punk Goes 90s Vol. 2’ the worst installment in the series. There’s a modest amount of noteworthy numbers on here to keep you interested, just avoid the one or two catastrophes. For fans of the series, it ticks off all the right boxes; it’s a harmless, fun set of songs and nothing more. But why isn’t there a Semisonic cover on here?

‘Punk Goes 90s Vol. 2’ by Various is out now on Fearless Records.