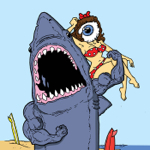 Before I analyse and pick apart this release, I just want to say that as a reviewer I find it difficult to review compilations such as these, especially considering only two of the eighteen bands have releases on the label. For some background info on said label, Beach Community is its name and it is based in Oxford. The label only just began in August; it specialises in punk, hardcore and anything related releases. This compilation entitled ‘Life’s A Beach’ is their first release and gives on an idea of the sort of music they put out. It also acts as a tribute to the quality of releases within these genres.

Most of the bands featured on this comp belong to the indie, emo, post hardcore and pop punk genres of the punk spectrum. What’s also great is that both sides of the Atlantic are covered, as the crème de la cream of the American and UK scenes rub shoulder to shoulder together. Having Balance and Composure’s ‘Reflection’ lead into the progressive marvels featured in ‘Interiors’ by Crash of Rhinos is a resounding stroke of genius. In fact seeing all the great names selected for this compilation helps to give a well thought out idea of how great the current punk scene has got it. Daylight, Gnarwolves, Joyce Manor, Dikembe, Nai Harvest, Moose Blood, Defeater… it’s hard to argue with the label that they have firm grasp of what’s great in the here and now

If there are there any chinks in the chain to point out, then maybe the consistency in regards to most of the songs being released in 2013, whilst ‘Count’ by Make Do And Mend, a release from 2012, just sticks out of this theme. But the theme here really is showing off the superb flux of bands that have come out of this genre/scene known as punk. It certainly gives the label some attention; providing an idea of the sorts of bands they’ll specialise in future.

One song that should be importantly noted belongs to one of the label’s first signings. Berkshire’s Hindsights rightly use this compilation as an opportunity to show their melancholic colours. ‘Daydreams’ is from the band’s up and coming five-track EP ‘The Thoughts That Weigh Me Down’. This will be the first release of original material from the Beach Community, and it is truly marvellous. ‘Daydreams’ is fuzzy, heart-warming, soft, gravelly loud, and spectacular. They’ve taken an established indie rock/post hardcore sound and made it their own.

All in all, ‘Life’s A Beach’ is a rather well compiled and fantastic compilation. It shows off the quality in music under the punk umbrella and does the trick of advertising the sort of label Beach Community is. Give this comp a whirl, and keep an eye on what Beach Community is up to release wise; judging from the Hindsights track, we’ve got another great independent label in the making.

‘Life’s a Beach’ is out now on Beach Community Records.