Album Review: Transplants – In A Warzone 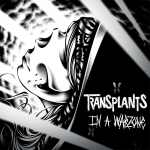 The longevity of the Transplants proves that unlike most ‘super groups’, they are a band who are not doing this to cash in or keep themselves busy during down time. If anything the latter would be a ridiculous accusation to make; made up of Tim Armstrong, Travis Barker and (Skinhead) Rob Aston, the key members have been extremely busy in between ‘Haunted Cities’ and ‘In A Warzone’.

Armstrong has been releasing covers and original pieces under the moniker Tim TimeBomb for the past year or so, as well as playing in Rancid. Barker has been busy with the reformation of Blink-182 as well as collaborating with a number of Hip Hop artists including YelaWolf. Aston has formed his own band Death March. The time apart and the projects in between have really shaped the members individually; Aston and Armstrong are both vocally stronger than the previous albums.

For me, the Transplants have always had that experimental sound to them; they’ve never been clean cut or constrained to a single sound and that was the appeal of them, they took something everyone knew and added to it. ‘In A Warzone’ however, on initial listening seems a bit too straightforward, the Rancid influence is certainly predominant in the guitar work and the experimentation of their debut isn’t as explicit.

Despite this they are still able to diversify their sound, whether it is a full blown hardcore track like title track ‘In A Warzone’ or a Hip Hop inspired jam like ‘Something’s Different’, the Transplants can never be too straightforward.

Their self titled much like ‘Haunted Cities’ had a number of guest spots, ‘In A Warzone’ is a more personal affair, with only a small quantity of extra pipes (see ‘It’s a Problem & Something’s Different’) it allows Aston and Armstrong to focus and control the vocal output, and it adds to the seriousness of the Transplants becoming a legit band, not just a side project.

If people were expecting a regurgitated self titled then I suppose you are disappointed. What we have here is a side project which has evolved into a more serious affair. The sound isn’t tame – if anything it is a more focused output.

There is an explicit Rancid/Tim Armstrong influence on this record but everyone loves Rancid right? The fact that each member has even had time to collectively produce another album is a big thing and it isn’t half-arsed. Anything these three do is always 100%, and this album is no different. The fact is it is summer time (supposedly) and this time of year isn’t complete without an upbeat punk rock record to soundtrack the season!

‘In A Warzone’ by Transplants is available now on Epitaph Records.