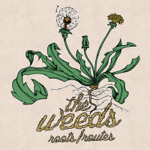 The Weeds are an American four-piece emo pop-punk band from Boston, Massachusetts. Whilst listening to ‘Roots/Routes’’, it’s clear this new up and coming band are trying revive the emo sound that swept the mainstream music scene over ten years ago. Unfortunately The Weeds are a decade too late to ever be a household name with records flying off the shelves of music stores.

‘Roots/Routes’ is a generic uninventive emo pop-punk EP created with little imagination. The record sounds like every other band of this genre and style.

The tracks sound poorly recorded and produced, with the vocals hardly standing out against the heavy music. The EP would have been more successful with better sound quality and adjusting the volumes of the different levels.

The EP begins with ‘Sunset Eyes’ which is a good opener for the record, and gives a glimmer of hope for the rest of the songs. The track begins with a soft slow-paced instrumental, and then breaks into the fast-paced punk-rock melody. This follows with ‘Attention’ and that’s when you are instantly hit with bitter disappointment. The song sounds exactly the same as the previous, and this pattern follows on throughout the rest of the EP. The tracks lack innovation and diversity, and every single song sounds exactly the same. You are also left dissatisfied when you hear the whiney American mono-tone vocals that violate your ears.

The songs star overlapping vocals from a male and a female singer. The male singer Joe Lacy, tends to take centre stage. However, in the “favourite” song ‘Feel Nothing’, it stars lead vocals from the female singer Justine DeFeo. The track also has catchy guitar and bass riffs, an upbeat melody, a catchy chorus and some awesome instrumentals.

‘Roots/Routes’ is an unimaginative generic EP that you won’t want to listen to again. Every track is a disappointment, which lacks an individual flare, a spark, something to make them special. Instead The Weeds sound like every other alternative emo pop-punk rock band from a decade ago, and unfortunately they’re just a little too late.

‘Roots/Routes’ by The Weeds is out on the 6th February on No Sleep Records.