Album Review: The Weaks – The World Is a Terrible Place and I Hate It and I Want to Die 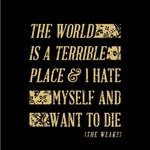 Both the opening track and the title of The Weaks’ new EP ‘The World Is a Terrible Place and I Hate It and I Want to Die’ are deceptively depressing. The latter’s irony is more easily discerned; it being a tongue-in-cheek reference to a band not unknown to these parts. Yet at first glance, the empty melancholy of the Philadephia duo’s newest title (their first “standard” release after their “a song a week” project) appears to have infected their usually upbeat style. “I am separating / I am separating from myself” is sung over a dreary, beaten chord. The gloom is swiftly dissipated by an almost joyous explosion of instruments, guided by the kind of lead guitar melody that originally made Weezer’s output so special.

The comparison is apt up to a certain point. Weezer’s early power-pop found were eminently accessible because their awkward, nerdy-metalhead quirks were formulated into something catchy and a little retro. You’ll find them at their most similar on a track like ‘To Thine Own Self Be True’, but this is more an exception than the rule. The Weaks, for one, are a little less tidy in their instrumentation. Two musicians can only make so much noise, something they remedy by buffing their sound out a little with some effect-lading. There’s also the matter of their somewhat more agressive (and perhaps downbeat) vocal style. A good example is ‘Nietzche’s Harvest Song’, on which the instruments make big messy upbeat fun -a hint of the Pixies perhaps- whereas the vocals shift from punky to dreamy.

Their punk drive is at highest velocity on ‘Instantaneous Vertical Speed’ and ‘How To Put An Audience To Sleep In Less Than Two Minutes’. The first is a speedy romp that somehow comes off as weirdly laid-back and casual. The latter, on the other hand, is a little more forceful, and the full throttle is considerably more tangible. The band career forth to the beat of a consistently beaten snare and a dirty-ass bassline, but they offer a counterpoint to the aggression through light harmonies and a cheeky guitar solo. They close with ‘Dunce Pageant’ whose opening moments is The Weaks at their most credibly emotional. That sentimentality is fleetingly matched by soft, echoing, strumming but they can only restrain themselves for so long, and the summery colourfulness of theirs swiftly makes a comeback. Both of those would’ve worked on their own, but that shift seems indicative of the band as a whole: unwilling to give in to pure sadness.

As such, the sentiment is never allowed to take over, the overpowering fun inevitably the winner time and time again. The Weaks are jolly by nature, but there’s a layer of melancholy that’s just begging to be uncovered by repeated listens. Should they want to really eschew any comparisons to above-mentioned band, they would do well to explore that exciting discrepancy between form and content. For the time being, ‘The World is a Terrible Place and I Hate It and I Want To Die’ is a solid entry point.

’The World is a Terrible Place and I Hate It and I Want to Die’ by The Weaks is out February 11th on Lame-O Records.