Album Review: The Swellers – The Light Under Closed Doors 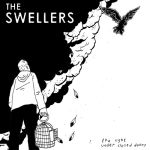 The Swellers are a band who like many others have been through the ringer quite a bit recently but they have come out in my opinion triumphant with this latest release. Having signed to the major label Fueled By Ramen, the band were to release two full length albums only for the relationship to turn sour. Leaving the major label they were to self release a small EP, finally finding their new home at indie label No Sleep Records; the band are back on track and back on form.

This album is straight down the line and to the point, with a running time of just over thirty minutes it has no intros or excessively long songs and this is what the band is good at. Gone are the glossy and polished pop punk songs with the catchy melodic dual vocal harmonies and back are the gritty punk songs about life’s good and bad situations.

‘Should’ starts the album off with some rough punk guitars which leads into some nice slow but catchy guitar rhythms. With an added yet not too long guitar solo near the end, it lets the song run with one more chorus to then finish on a single sounding guitar. Two songs that really bring out the more catchy side of punk on the album are ‘Big Hearts’ and ‘Great Lakes State’ which both have that high melodic lead guitar sound

The album also has a much slower song in the form of ‘High/Low’ which has that slow dreary bass and guitar lead. As a lengthy guitar solo comes in halfway through it breaks the song up and allows vocalist Nick Diener to finish on the lyrics “I’m going home”. Bringing the straight punk songs are what the band do best as on ‘Go Social’ (the lead riffs really make the song). The guitar peaks and dips throughout the song between loud punk riffs and slowed down rough sounding riffs.

Drummer Jono Diener gets to show off his impressive drumming skills on ‘Becoming Self-Aware’ as the drums switch between being fast and slow. Lyrically it feels like Nick has alot of negativity to get off his chest on ‘Friends Again (We Can’t Be)’; he sings over and over with the intense guitar riffs “so be honest we can’t be friends again, so be honest….”.  One thing the album has that stands out for me is the little guitar solos that pop up throughout the album. On ‘Favorite Tune’ the solo matches the lead guitar riff played during the chorus which is a nice little addition to the song.

Finishing on ‘Call It A Night’ it’s a straight outright rock song with some rough sounding guitar riffs and rumbling bass lines. Nick finishes the last bridge of the song with a nice touch of a slight nod to Swellers fans with a mix of lyrics from past albums, “I’ll find my way back home when I’m out of places to go. I’m done shovelling snow. But some of this will stay when the feeling fades away. When it all comes to light we can call it a night”.

What the Flint, Michigan band has made is a great punk rock album that has a mixture of fast catchy and straight outright rock songs. With the added low basslines and impressive drum work and at times pessimistic lyrics this is The Swellers on top form. To quote the Swellers song ‘Welcome Back Riders’, “Wait in line, enjoy the ride, It’s coming back again”. So who’s coming for a ride as The Swellers are back and sounding seriously impressive and trust me you’ll really enjoy the ride.

‘The Light Under Closed Doors’ by The Swellers is out now on No Sleep Records.