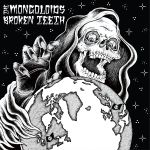 Without trying to over-generalise, hardcore is a genre that doesn’t see a lot of innovation. A few fantastic bands here and there will push the boat out and make some truly creative heavy music, but for the most part the genre is sonically stale. Sadly, The Mongoloids and Broken Teeth don’t do a lot to step away from that staleness on their latest split release, but on the bright side this is a solid set of songs that will please anyone who expects high quality hardcore, first and foremost.

The Mongoloids‘ half of the 10 minute split is definitely the faster of the two, bringing strong hardcore punk vibes and the occasional more technical riff which, together with the frantic solo in ‘Mountains of Misery’, gives a semi-thrash feel at points. The singer’s vocals are a little jarring at first – the tone of his not-quite-shouting feels a little forced for the first few listens, but settle into the hardcore punk style nicely after you’ve heard the tracks enough times for the instrumentation to take to the forefront.

Split by The Mongoloids / Broken Teeth

Broken Teeth, on the other hand, bring a much more hard-edged sound to their half of the split. The instrumentation is considerably simpler, backed by extremely saturated guitar tones and filled with beatdown after beatdown as a matter of course. Where The Mongoloids favoured a semblance of intricacy in their aggression, Broken Teeth are there for the mosh and only the mosh. That, together with the sheer rage in the vocals, creates a listening experience where you are grabbed by the throat and not released until the EP ends – which is only about 5 minutes later.

The difference in tonality and production value can put the two halves at odds with each other a little bit, mostly in how much sonically heavier the second half sounds than the first, but it really isn’t anything that would put anyone off – odds are that if you like one band you’re bound to like the other. Otherwise, this is a consistent release that, while not bringing anything particularly revolutionary to the table, does what you would expect from any hardcore release and does it well.

‘Split’ by The Mongoloids and Broken Teeth is out now on 6131 Records.