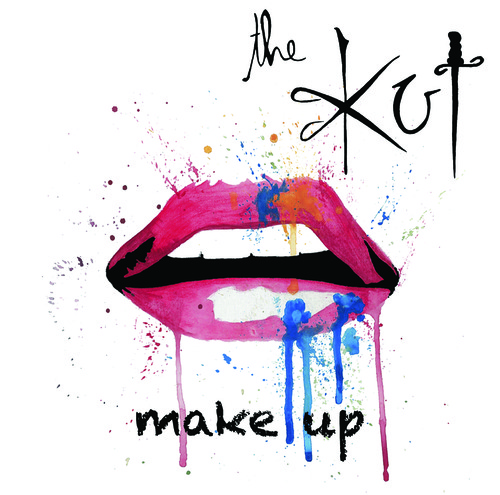 For the masses of people who still pine desperately for the grunge heyday of the early nineties, dress in plaid and decry the lack of quality by new bands representing the genre, you need to check out London trio The Kut right now. Go on, off you go, I’ll wait. See, a bit special aren’t they?

Unfortunately being all of the Lady persuasion, the band seem doomed to be endlessly compared to Hole, however this does them a huge disservice as there is enough depth and composure on show on debut EP ‘Make Up’ to make them worthy of more thought and consideration then such a lazy comparison.

That said, for those who do need a comparison to have an idea of if they’ll like a band, try a gloriously scuzzy middle-ground between Nirvana, Placebo and The Distillers, and you won’t be too far off.

The EP quickly smashes the listener squarely between the eyes with a wall of distorted wailing riffs as first track ‘No Trace’ roars sullenly into life like a sleeping teenaged bear poked with a stick. Front-woman Maha’s vocals do a good job off being moody and forceful, without the usual overbearing grunge angst and with unexpectedly melodic overtones. Some neat vocal harmony sections also nicely balancing off the pulsating relentless guitars to make the track a well-rounded listen.

The EP’s title track has a considerably more punk-rock feel, a chugging bass riff more apparent in the mix playing off of ringing guitar chords and laying the ground work for an impressive chorus swell and a rather killer guitar solo.

‘Mario’ sees another subtle change in direction bringing the lo-fi fuzz in spades and ringing grooving riffs competing gamely for attention with insistent rhythm sections. Things then get moody with the swirling distorted riffs of ‘Closure’ which also features a lead vocal with a curiously eighties vibe.

‘Make Up’ finishes on a high with the pacey indie-grunge of ‘DMA’ providing both one of the record’s catchiest moments and its most consciousness occupying chorus hooks.

The Kut have shown undeniable grunge credentials while simultaneously making a debut EP that’s as loaded with potential as it is a cool as hell listen. These London ladies seriously rock.

‘Make Up’ EP by The Kut is out on the 18th of August on Criminal Records.