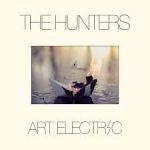 The Hunters’ third full-length release, ‘Art Electric’, accompanied a welcomed change in weather this week, and is an unusual blend of punk, rock ‘n’ roll and folk. The Quebec quintet, having extensively toured, are now onto their third release under a trio of labels; Stomp Records, Black Numbers and Fix Records. While ‘Art Electric’ is arguably appealing in its diversity, it is this diversity which seems to cause the album to struggle to maintain consistency.

The second track of the album, ‘Hold On, Marci’, was just not up to it for me. The standard rock vibe failed to appropriate from the outset. The repeating simplistic bass line of two notes and a rundown of the verse, accompanied by the similar riffs, lacked variety and a hook to keep me interested. The chorus followed suite. leaving me somewhat unoptimistic for the rest of the album.

The press release of ‘Art Electric’ notes that The Hunters share similarities with bands such as Rise Against. Having read this, and being a Rise Against fan, I could not stop making that exact comparison. Tracks such as ‘Dave Grohl’ and ‘Roadworn Heart’ particularly seem to take inspiration from Rise Against. However, I feel that this comparison is a too easily exaggerated one, as ‘Art Electric’ is devoid of the hooking riffs, emotive lyrics and the gravel of McIlrath, with its relatively raspy vocals and uninspiring, repetitive lyrics.

Promises by The Hunters

Nonetheless, I cannot be completely pessimistic. The surprisingly excellent outro of ‘Lighthouse’ and ‘Postcards and Golden Lovers’, with an opening similar in tone to that of The Gaslight Anthem, caught my attention, making an interesting contrast to other elements of the album. However, ‘Postcards and Golden Lovers’ unfortunately sounds like it should be played in a Cadillac rolling down a remote highway, and thus lacks universal credibility.

Though my review of ‘Art Electric’ has been rather critical and scathing, it would seem that the acclaimed producer Matt Allison (Alkaline Trio, The Lawrence Arms, The Menzingers) and I have conflicting ideals. I shall compare my listening of the album to watching your team have possession, perking up only for them to lose it to the opposition, as ‘Art Electric’ left me rather discouraged. Despite its range, ‘Art Electric’ is disappointingly average.

‘Art Electric’ by The Hunters is out now on Stomp Records, Black Numbers and Fix Records.