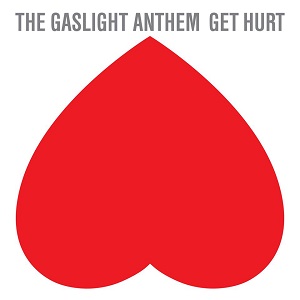 New Jersey outfit The Gaslight Anthem have returned once again with a new dose of punk flavoured heartland rock, in the form of their newest album ‘Get Hurt’.  Yet, The Gaslight Anthem have seemed to have altered their sound for a slicker, more polished tone. As stated by Brian Fallon himself, Pearl Jam influences seep through, alongside older classics like later Replacements albums and even a sprinkling of Modest Mouse. Yet, does this new sound prove to be beneficial in creating a good album?

As aforementioned, the most startling thing about this album is the change of style that The Gaslight Anthem performed so well. The gritty, “rough around the edges” sound that everyone knows so well has been smoothed over for a more polished release. Slower, ballad-like songs encompass parts of the album. Songs like ‘Underneath The Ground’ and ‘Get Hurt’ conveys a sense of sincere emotion, with the title track so finely produced it adds a layer of pure vulnerability to the song, without sounding artificial.

From songs like these, it is no doubt that ‘Get Hurt’ is The Gaslight Anthem’s most emotional release. Charged with an unruly passion, Fallon profoundly wears his heart on his sleeve, exposing the impact that his divorce has had on his life. Yet, album closer ‘Dark Places’ is the pinnacle of a cathartic release. Packed to the teeth with emotive lyricism (“If I thought it would help I would carve your name into my heart’) as well as an infectious chorus, ‘Dark Places’ is one hell of an anthem, as well as one of the best songs The Gaslight Anthem has ever written.

During certain parts of the album however, The Gaslight Anthem still proudly display the alcohol-fuelled rock n roll that they’re known for. Tracks like ‘Rollin and Tumblin’ and ‘Stray Paper’ offer the listener the heart and soul that Gaslight Anthem fans have craved since ‘The ‘59 Sound’ era. Yet the too clean production, which works so predominantly well on their slower tracks, dumbs down the wild instrumentation, reducing the band’s New Jersey rock n roll swagger to a comfortable stroll in the park.

Overall, ‘Get Hurt’ is by no means a bad album, as all songs are excellently crafted and produced, yet in all honesty, it isn’t remarkable enough to be the album that The Gaslight Anthem were trying to achieve. The cleaner tone of the album is both a blessing and a curse, as while it accentuates the emotion of the record, it fails to give the same rock n roll impact previous albums have. As a result, ‘Get Hurt’ is undoubtedly going to polarize fans of the band, whether people are going to side by the new Gaslight Anthem, or cry traitor from the first song. But, perhaps the best advice I can give, is that if you are a Gaslight Anthem fan, then by all means listen to it, and decide for yourself whether you enjoy this new album or not. However, a new listener should skip this one, as it ultimately fails to deliver the classic sound that made the band so great.

‘Get Hurt’ by The Gaslight Anthem is out now on Island Records.