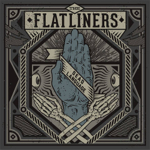 The Flatliners have established themselves as international scene heroes over the last few years and their new album, ‘Dead Language’, is hotly anticipated. It was for this reason that I was very pleased to see this album pop up in my inbox earlier in the week. So, my disappointment can perhaps be imagined as opening track ‘Ashes Away’ totally passed me by and faded into ‘Birds of England’. A weak start to pluck the nerves that fortunately put to rest by the second track’s majestic chorus and that had been completely obliterated once I’d had a taste of the fabulous vocals of ‘Brilliant Resilience.’

Other tracks came back to haunt. None of them bad, just rather middle of the road punk rock that gets feet tapping but doesn’t quite hit the heart the way other tracks do. The speed of ‘Bury Me’ sounds like Alkaline Trio minus Matt Skiba’s instantly recognizable voice and the mid tempo march of ‘Hounds’ is excellent also. But the album still flows like a good album with occasional greats despite the fact that perhaps over half deserve categorizing as the latter.

Later tracks ‘Sew My Mouth Shut’ and ‘Young Professionals’ ensure that ‘Dead Language’ ends on a high note. The closer bursts and bites with a brilliant melodic resonance before one of the album’s catchier riffs leads into a final soaring chorus.

This is an album that I’ve heard a hundred bands play a hundred times. It’s also an album I’ve thoroughly enjoyed on almost all of those occasions and ‘Dead Language’ is no different. It doesn’t stand too far out from the crowd, but it does remind how good that crowd can be.

’Dead Language’ by The Flatliners is out now on Fat Wreck Chords.