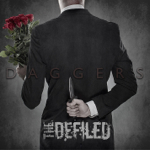 I first came across The Defiled at a Dragonforce gig, coming out as the headline support covered in black makeup and drinking Jaegermeister from the bottle I could tell they had a confidence about them. And no doubt as I listened to this album it oozed confidence and pure metal.

Opening song ‘Sleeper’ has a apocalyptic sounding drum march intro with some piano and soon explodes into a frenetic mix of fast guitars, pounding drums and haunting screams from frontman Stitch D. Three songs that are more melodic in style are ‘Unspoken’, ‘Infected’ and ‘Fragments of Hope’ bringing some heavy riffs with a sprinkling of electronics they also allow Stitch D to stretch his clean singing and really show off his vocal skills on the tracks.

‘Saints and Sinners’ is very much in my eyes a Fear Factory sounding song with the fast double bass sound with some very prominent electronics and simple yet heavy riffs; it really hammers home the industrial metal sound. The no doubt crowd bouncing and most memorable song off the album is ‘As I Drown’ which has the repetitive catchy lyric line of “I have tried my hardest and you have beat me down…”. With a heavy bouncy guitar riff and slowed down drum beat it’s a seriously catchy song.

Now a song that Marilyn Manson would have loved to have written but obviously didn’t is ‘Porcelain’ which brings in some spooky sounding synths and a de-tuned clean sounding lead guitar riff. The band is of course not afraid to slow things down and get emotional as Stitch D croons over the loss of someone you have loved and lost on ‘Five Minutes’. A nice mix of acoustic guitar, piano and electronic beats it’s an emotional and touching song.

The band finish the album and fire on all cylinders on closing track ‘No Place Like Home’ which encapsulates every aspect of the band so perfectly. Some heavy guitar riffs blend into melodic vocals before going full speed back into some fast drums and heavy riffs to then finally fade out into a slowed down doom riff.

It’s worth saying this album was made possible from a Pledge Music campaign, produced in Florida by metal aficionado Jason Suecof, who has worked with many other successful metal bands: Trivium, Bury Your Dead and The Black Dahlia Murder to name a few. He has made ‘Daggers’ sound crisp yet have a jagged sound to it and it works really well for The Defiled.

What The Defiled has made here is an album that shows off all the best aspects of what they can do. From seriously fast and heavy as hell riffs to industrial electronic sounding songs to even slowed down acoustic ballads, every aspect is covered and done well. The only downside with this album is the riffs can be a little repetitive and sound too similar which is a shame. But with this album out there and finally a major label behind them (Nuclear Blast), and no doubt some tours outside the UK, The Defiled are looking set for great things.

‘Daggers’ by The Defiled is out now on Nuclear Blast Records.