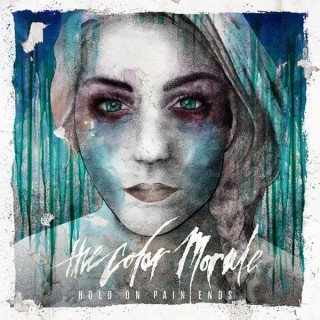 The third full length album from Rockford’s metalcore brandishers The Color Morale is, at times, a fairly trite offering. ‘Hold On Pain Ends’ is plagued by those same djent / groove inspired cliches that have been fogging up the genre for some time. For this lack of inventiveness, picks such as opener ‘Damnaged’ and lead single ‘Prey For Me’ really don’t deliver in the manner they intend to. A wash of stale guitar licks and nondescript drumming, the same unfortunately applies to many of the albums heavier moments.

This isn’t to say that ‘Hold On Pain Ends’ doesn’t have redeeming qualities. Most of these are owed to vocalist Garet Rapp whose delivery boasts a lot character than many of the indiscernible frontmen of today’s metal scene. ‘Outer Demons’ is case and point of this, with a chorus that stylistically lingers somewhere between the ubiquitous vocal work of Letlive’s Jason Butler and the grooves of Aussie counterparts Dead Letter Circus.

The album’s midpoint ‘The Ones Forgotten By The One Forgetting’ is a short but interesting interlude and favours serenity over sonic annihilation. It’s placement on the record and execution offer a welcome change of pace. The same can be said for the titular track ‘Hold On Pain Ends’, an impassioned blend of chugging acoustics and soothing melodies from Rapp. Building expertly into passages of gang vocals and effervescent piano lines, it’s comparative restraint makes for a truly spectacular close to the album that leaves you wondering why the band don’t favour this approach more often.

‘Hold On Pain Ends’ by The Color Morale is out now on Fearless Records.