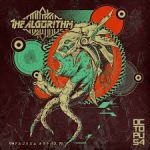 “Breaking boundaries!” seems to be such a cliché phrase to find in a press release these days. So many bands are “crossing over” or “knocking down walls”, although I tend to think that there can’t be that many walls or boundaries left if they’ve already been knocked over or broken down. Obviously I could go into a massive debate saying that music doesn’t need genres or categories and that it’s journalists (who, me?!) that place bands into such genres and categories. So, whilst The Algorithm do blend many different genres together, I’m going to inevitably name a few as a means of auditory description and thus, a sort of catch 22 unfolds.

It was Enter Shikari that really opened my eyes onto the mashing of ‘rock’ and ‘dance’ (naming the two genres in their most basic/root form) although a stint into The Prodigy showed me that they weren’t the first to do it, and even then there were probably more before The Prodigy. There’s plenty more in today’s vast world of music; plenty good and plenty bad. However, it shouldn’t be a surprise to anyone when the advancements of music technology and the evolution of musical genres are rapidly increasing with each year. So how does a band combining the likes of guitars and computer based music make their mark? Well, from the sound of ‘OCTUPUS4’, it’s a case of going to the extreme and and standing out like a sore thumb.

My first impression was combined with my first ever listen on this here second album by The Algorithm. I thought the first track ‘autuRun’ would set the pace but then ‘discovery’ completely changed the feel with this kind of, well, awful 80s synth pop vibe. And not in the “it’s awful, but cheesy and I kind of like it” way that you might understand. It just really made me cringe with the bass and the lead line, and listening to it right now to refresh my memory really grinds my gears. Too many awkward/cliché sort of tones going on. However, skipping on over to ’_MOS’ and ‘will_smith’ and we’re still on the mainly electronic side of things, although an up-to-date-not-delving-into-the-past sound.

So where are we breaking boundaries? I need some musical evidence that will justify those first two paragraphs and it’s ‘ピタゴラスPYTHAGORAS’ that does it. The down low guitars and double kick drum come in to really solidify and power through this synth lead breakdown and the song really utilises and flows between the rock and the dance. But as I said before, I’m only using those two names as their root form as the heavier guitar led progressions follow a djent pace whilst the latter of the song has a sparse snare usage that’s very elusively leading us into the dubstep tendencies later on in the album. Aptly titled ‘synthesiz3r’ utilises synthesizers (of course), but with a metal drums lead opening with plenty of kick, combined with a really prominent bass tone that could easily be used to describe as the soundtrack to “insert old SNES game here” if it was from the future and was written whilst on acid. And then that ending. No guitars initially in sight but still a breakdown nevertheless, complete with breakdown ‘roar’. Even ‘un dernier combat’ unleashes a really chilled hip hop section complete with French rapping. Of course I’ve no idea what’s being said but it sounds really, really cool. Of course. Oh, and then another breakdown, which makes me think that this is what all breakdowns in the future will sound like.

Being dowsed in electronic genres means that quite a few of the songs tip over the 4 minute mark and will become quite repetitive. Of course though, this is just a trait of the music and ‘OCTUPUS4’ certainly an interesting album that needs to be listened to with a very open mind. If you’ve never liked any form of electronic music then it’s probably best to stay away, although then again the combination of electronics with rock-based genres may just change your mind. There’s many surprises that will entertain, but these tend to occur in the latter half of the album where the “breaking boundaries” issue really does occur, and occurs well; heavy doesn’t just refer to guitars and that’s something that The Algorithm can really take from this second release. Whilst it’s not really my ideal cup of tea (and I don’t even like tea), I have always appreciated electronic music for the production values. Of course it’s not on the same level as the production of the electronic megastars of the world a.k.a Skrillex (You know the guy. The one who was in From First To Last? Yeah, you know. I’ll stop) but still, credit given where credit’s due for doing some different.

And despite my initial tangent of “you can’t really break boundaries if they’re already broken/I shouldn’t be categorising music as I am therefore the problem”, I do believe that this, well, yeah, it is breaking boundaries. Maybe not necessarily breaking, but more so throwing everything into a melting pot. It’s a blend, a fusion, and that’s something evolutionary in itself. There’s certainly a niché out there who will absolutely love ‘OCTOPUS4’ but for now, The Algorithm remain still a bit of a risky listen. But a good risky listen. Heck, I don’t even know what I mean anymore. Ok, final sentence; give it an open minded try as you might just like it. Cool.

‘OCTOPUS4’ by The Algorithm is out now on Basick Records.